Gum surgery was so fun I went and had the other side done three weeks later! ;) While Sarah did an amazing job of meal planning after the first surgery, we did want to change it up.

There were several excellent soups we hadn't had yet (African groundnut, creamy tomato, corn chowder, etc.) but we started with simple refried beans. I didn't want to eat them plain, so Sarah had the brilliant idea to serve them over soft polenta! 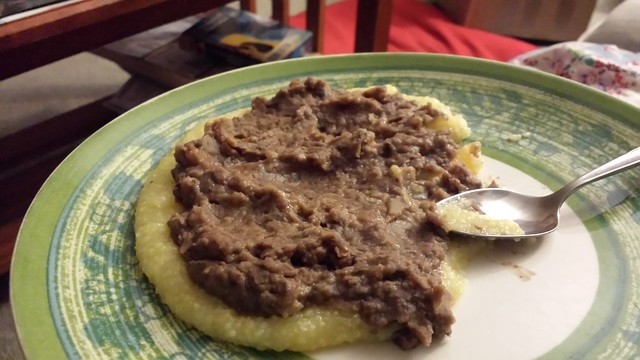 Next was one of our favorite recipes adjusted to not require any chewing. It's supposed to be chickpea crepes with a sweet potato curry, so we skipped the crepes and also just roasted the sweet potatoes whole and blended them rather than chopping them up and eating them as cubes. 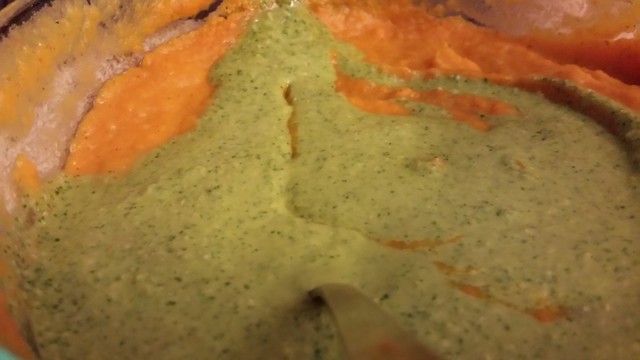 Getting more creative, Sarah came up with the idea for  blended Shepherd's pie! Each layer (mashed potato, lentils/mushrooms, carrots, peas) were separately seasoned and blended before being assembled: 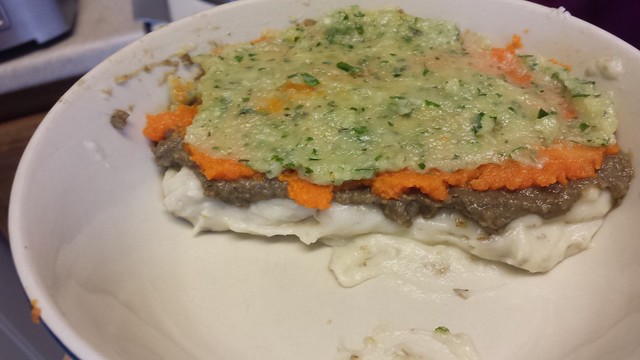 For breakfast I mostly relied on blending up oatmeal with some almond milk, peanut butter to help me last until lunch, and thawed frozen blueberries. It comes out kind of goopy and gross honestly but it was easy to drink: 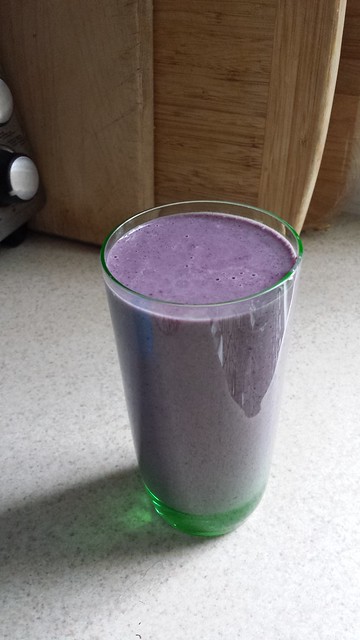 And then I forgot to take photos of the African groundnut stew with red swiss chard in it, but that was also delicious and creamily soft! This definitely made the recovery process much more pleasant! I find that even weeks later I still can't eat cold foods like ice cream, so milkshakes (a frequent suggestion for a soft food) were definitely not going to work as well as these did.
Posted by Jon at 2:12 PM No comments:

Our friend Riley who hosted the epic Jurassic Park-ty for his birthday last year decided to go with a theme from the movie Alien this year. The obvious response was to make a torso cake with the "chestburster" phase of the alien actually bursting from the cake. Here's how that went down. The basic ingredients were 1 cake, black cherry juice, pectin, and official Alien chestburster chopsticks (in lieu of making a homemade one out of flour / water / salt).

Step 1 was to prepare by making the "guts." We were already using pectin and black cherry juice to make alien-head gummies using a mold (the second photo has some with pineapple-cherry juice for better flavor), with the all-cherry ones in particular looking and feeling super creepy like a blood clot or engorged leeches: 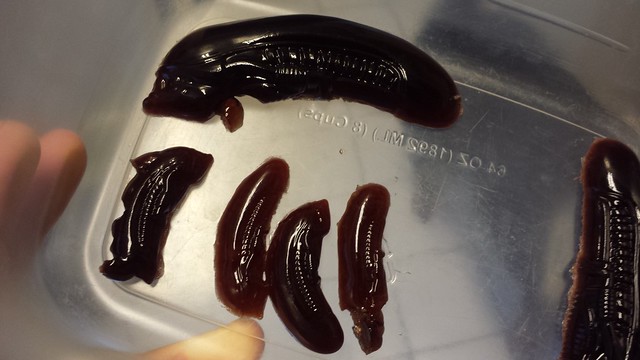 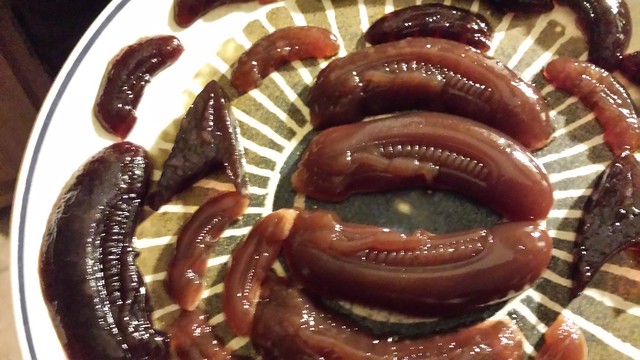 so the ones that didn't come out right were just mixed up into chunky blood-red guts.

Note: if making gummies in the microwave in tiny batches because you only have one stupid tiny mold, be sure to watch the juice carefully to prevent this: 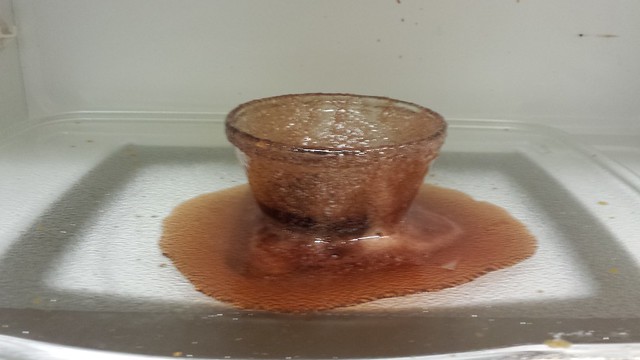 Step 2 was to make an ordinary carrot cake. We put it on top of a large cardboard box with plastic wrap on top, and a hole cut for the chopstick. We scooped out a shallow divot to make room for some guts. We also adjusted the alien chopstick to the right "resting" height before emerging (you can see the white tip peeking out) so that we could secure it in the box properly: 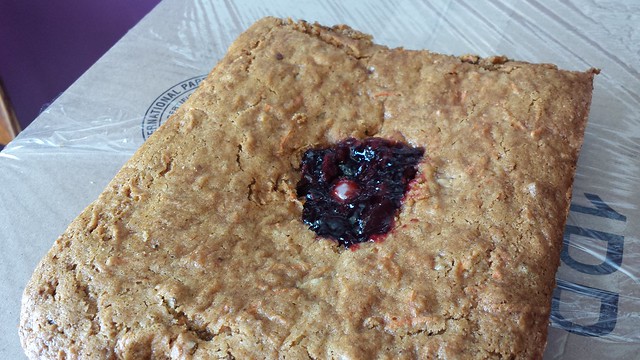 Step 3: we don't just need the alien head to be just below the cake surface before emergence, we also need it to go to just the right height when it's pushed up so that you see the whole thing but not the boring chopstick part. That's what the sideways chopstick is for, to set the emergent height. The plastic eyedropper full of cherry juice was also carefully aligned so that the nozzle tip is at the cake surface but not high enough to be visible when the alien bursts out. In initial tests the juice shot up about 3 feet, so I played around with plain water to figure out how much pressure to use to get a good spurt without making a huge mess. 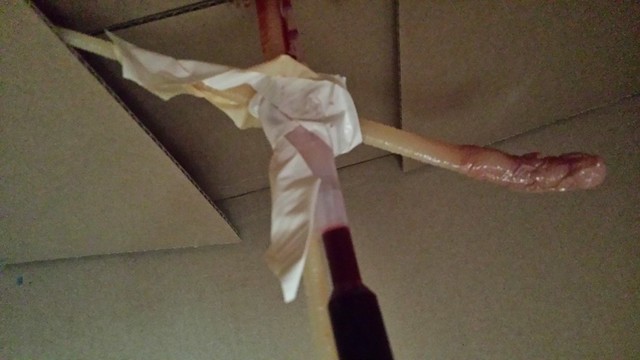 Step 4: Ice it up (we used gross icing from the store to save time), and add a plastic-wrapped printout of John Hurt's head to provide a clue as to what's going on here. 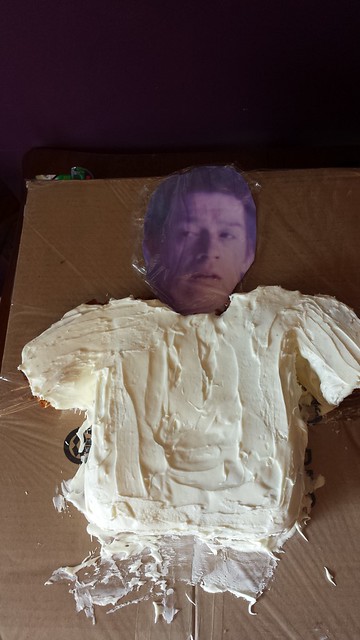 Here's the cake on the box (sides of arms un-iced b/c we didn't have enough) and my hands in the box ready to go, just waiting for Sarah to hit play on my cell phone to start the audio file from the actual scene in the movie with the alien bursting out and screeching" 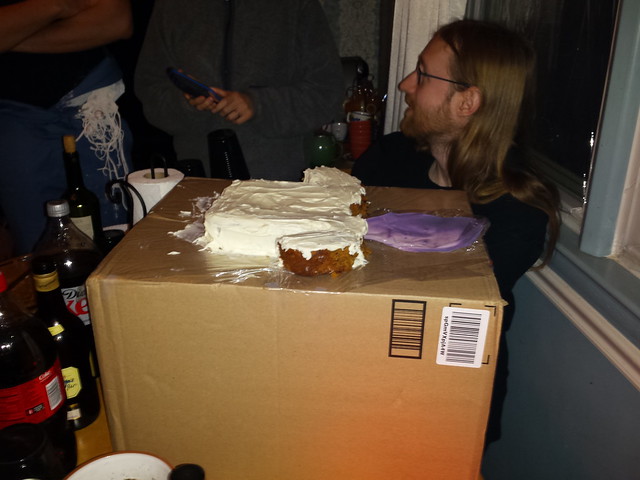 And here's what it looked like after emerging. Sadly our video footage of the event didn't take when Sarah's phone froze up. Also, you can see that there is some cherry juice speckled all over the cake, but unfortunately when the cake was being moved the nozzle tip ended up pressing into the chopstick base such that it was just a gentle spitting rather than a real eruption of fake blood. Also, the extra guts below the alien were applied after emergence when we realized that most of the guts below the icing were invisible. Alas. 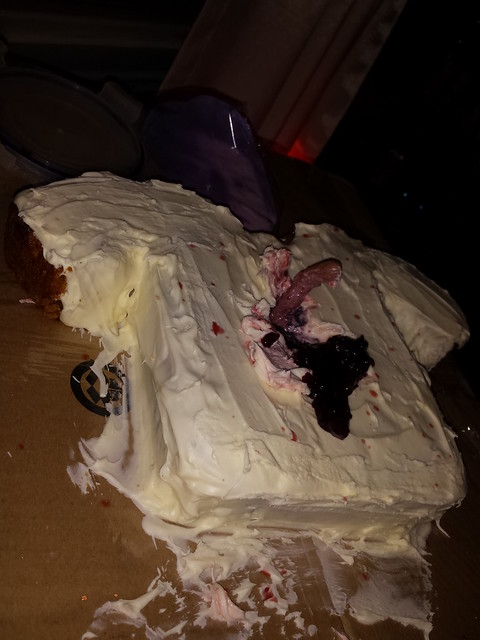 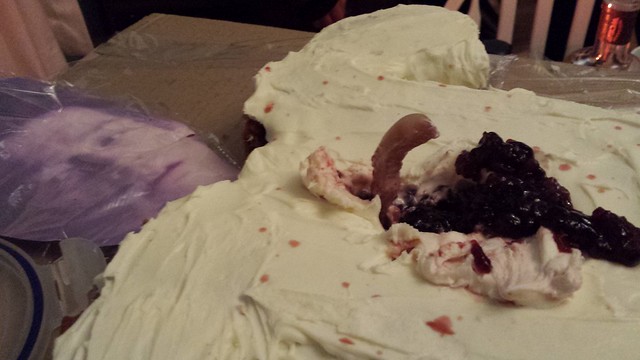 Despite the minor problems, it was still a lot of fun! Sarah and I went for free costumes by printing out alien facehuggers and taping twisties to the legs so that they would grip our faces and hang onto our glasses: 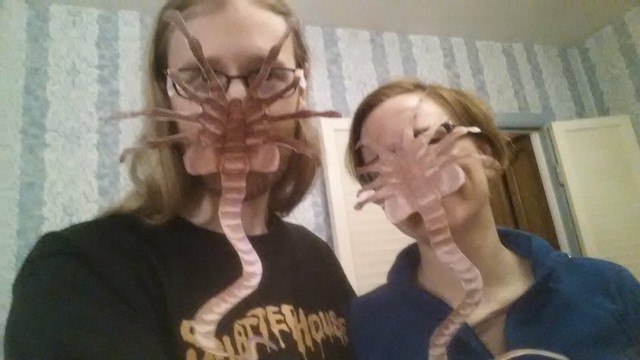 Most costumes were more impressive, especially the adult alien and power loader exoskeleton! 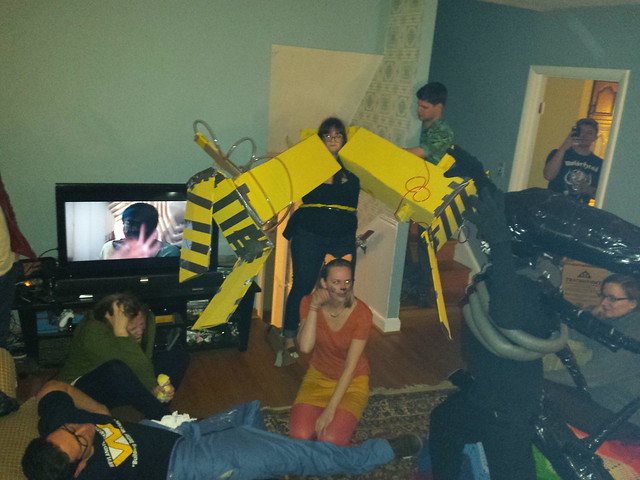