I was a pasta sauce virgin till last night. I made my first ever homemade pasta sauce - and I was ridiculously proud of myself! I was just beaming. The recipe is from Vegan YumYum, which I can't praise enough. Here is the reason why you need to go buy the cookbook - farmers market ready recipes. If you are into local food, the environment, eating sustainably, you really need to shell out the minor amount of dough for this cookbook. Many times I go to the farmers mkt and there are a bunch of veggies staring at me and I wonder what the heck else can I do with these guys? Then you check your cookbooks and realize you have to go buy mangoes or yucca or some other crap they import from somewhere far away.

Now, I haven't made most of the recipes from VYY yet, but the ones I have made were very tasty and also didn't require some tropical or hard to find thing. Its very local food friendly.

I'm not going to post the recipe here, b/c you need to go buy the cookbook, but I will say I substituted fresh tomatoes for 50% of the canned and thusly added 2 tsps of tomato paste b/c it needed a bit of sweeness/mellowness. Also I added maybe 1/4 cup of water because I had drained the can of tomatoes and I wasn't sure if I was supposed to but it was looking a bit too thick. Also I used an immersion blender to blend it all up.

We also made a simple pizza topped with garlic infused olive oil and sliced tomatoes in a variety of varieties. It was our typical pizza though we used 2 cups white whole wheat and 1 cup AP flour. So a little drier than an all white flour pizza, but still quite tasty. J. spent much time organizing the tomatoes in a symmetrical fashion. Here's a picture: 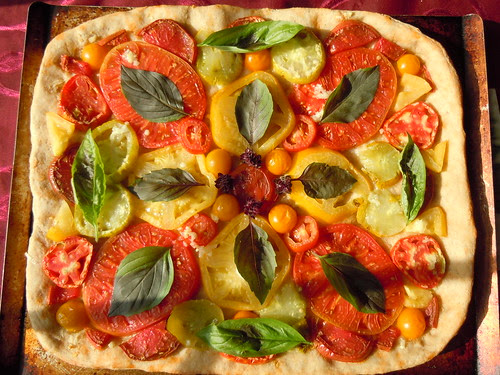 How not to make campfire stew + Vegan s'more challenge 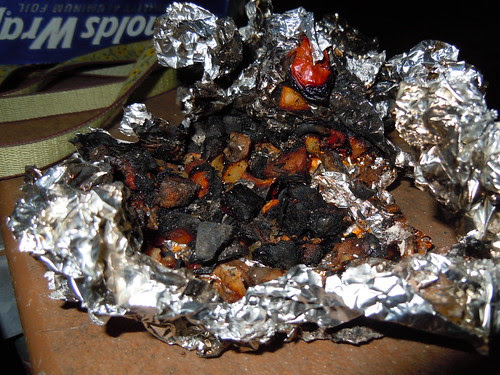 Observe, it is pieces of charcoal shaped like carrots, sweet potatoes, and field roast sausage - fun! This actually was an excellent concept and had we followed a few simple rules, it probably would have been really tasty.

We took about 1/2 of that mix along for our camping out dinner, and placed half of each into a SINGLE PIECE OF TINFOIL which was GENTLY PINCHED CLOSED, and slid it down into the really hot bottom part of the fire. Now, as with any fire, you need to adjust log positions, add more wood, etc. During this time, our single piece of tinfoil - only milimeters thick - of course tore, and the steam which was produced while cooking forced open the tops, so ashes from the wood fell into our stew. Also, due to being exposed to the flames, much of the stew itself became charcoal.

The biggest fan of the stew? our dog. Yes, even the carrot shaped pieces of charcoal she found quite delightful, but we were concerned about the impact on her digestive system so we only let her have a few pieces. (by that I mean, she ate the few pieces which fell to the ground as we were transferring the stew to the table, but we did not actively feed her pieces after that).

If I did this again (and I certainly hope to once I get an extremely thick bunch of puffy things to sleep on top of in the tent instead of that weak ridgerest which let every rock and stick bruise and jab into me) I would wrap the stew in several layers of tinfoil, making sure the ends that get cinched alternated sides so the steam would have a hard time busting through.

I know you want to be a healthy person who doesn't eat 100% crap, but really, don't use mi-del graham crackers for your smores, they are tasty but they crumble apart just removing them from the package. yes, I know mi-del has honey, and I could care less, because I just don't care about bees, I'm a mean and awful person, how could I not care about bees, those poor souls, they are just crying out for my love! 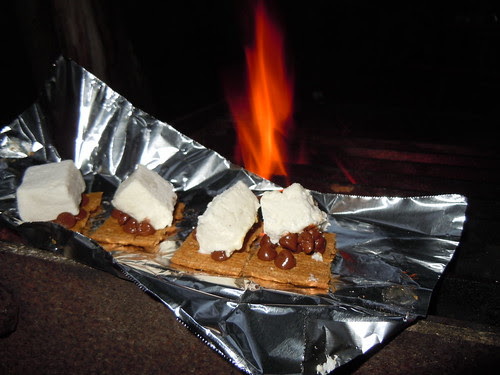 The best technique we developed at home, which was microwaving the marshmallow for about 20 seconds or so on top of the graham cracker, then place it into the toaster oven with another graham cracker with chocolate chips on it, and toast to desired doneness.

This is reminding me of that x-mas when the fiance purchased me a bag of Chicago soy dairy's dandies (marshmallows), which are petite, and I must have consumed 20 cups of hot cocoa and dandies. It was AWESOME. I think we will try dandies next camping trip, but we will need a very slim stick to hold them, since they are teeny.
Posted by Sarah at 10:25 AM