Not really that Korean Korean Tacos

We recently received our first issue of VegNews, which yes, I subscribed to because I want to submit our wedding later to get in their vegan weddings issue...but anyhow, they had a recipe, thankfully, which did not involve avocados and chocolate (you know those raw pudding recipes), or bananas - because Jon hates bananas and I recently had a bad avocado/chocolate pudding experience. Basically we had an extra avocado (I always get more in case I cut one open that's not really ripe), so I thought "why not take it to work, I have cocoa powder at my desk, and can use the sugar packets to make a pudding!". So yes, I ate an entire avocado with cocoa powder and sugar one day, and although it was good at first, I felt pretty sick by the end and I can't mentally handle the idea of a chocolate avocado pudding, possibly forever. Just like I can't ever eat a vegan sausage/cranberry stuffing ever again.

Where was I? Oh yeah, they had a Korean fusion taco with tofu, korean-esque flavors, and a pear cilantro slaw. We didn't have any tofu, but I thought - why not make Korean flavored chickpea cutlets (based on the V-con ones). We didn't have an asian pear or napa cabbage, or cilantro, but we did have purple cabbage, and apple, and mustard greens.

After gathering my ingredients, I realized we were out of gluten flour. I was pretty shocked, its like how do two food-obsessed vegans run out of a basic staple like gluten flour...its like when you run out of nutritional yeast or something. So here's where it gets wierd (um, its already wierd if you're an omni reading this). Instead of gluten flour/chickpea cutlets, they became quinoa chickpea cutlets with additional chickpea flour and bread crumbs, and Korean add ins like garlic, scallions, red pepper flakes, etc.

We really enjoyed this and Jon insisted I write down how it was made so we could replicate it again. Someday he will learn that there are pretty much only 2-3 things I ever want to make more than once. One of those is mushu vegetables, another is gardein & mushrooms stroganoff.

For the future, I would like to add more flavor to the cutlets so I could bake them instead (yes, you can cheat and have less flavor when you fry things), because quinoa absorbs a lot of oil while frying and so its not as healthy as you would hope. And they fall apart fairly easily. But lots a protein!

Drain & rinse chickpeas, mash, then mix in quinoa and most everything else except for your chickpea flour and bread crumbs. They go in last because you add as much of them as will make your patties dry enough. I'm not sure why your patties need to be on the drier side, but probably there's a reason why most cookbooks don't have you throwing wet batter-style patties into oil. Maybe they absorb even more oil, who knows. Then heat peanut oil up on medium high, and fry your patties about 4-6 minutes per side.

This slaw is super awesome, and I love it. I didn't actually make as much as I'd wished I had, and so I will make more tomorrow, because yum!

Just peel your apple, shred it, chop your mustard greens & purple cabbage, and chop the scallions, mix everything together except Sriracha - add a teeny bit at a time because if you add too much it'll ruin it. Perfect to eat right then. If you leave it sit overnight, you'll have to re-Sriracha it, because the salt makes the veggies lose some moisture, and this will drain to the bottom along with the Sriracha flavor.

In conclusion, while Jon loved the patties and the slaw, I think the slaw was the real winner. In addition to having fantastic flavor, I always feel extra proud of myself when I eat raw veggies and they are super tasty like this, I feel healthy and not in a "brown rice and steamed brocolli torturing myself" way. More like an embracing life and flavor, and health too, as a bonus way. :) Enjoy!
Posted by Sarah at 2:21 PM

This recipe is based upon one in the Color Me Vegan cookbook we recently purchased when attending Colleen's book signing. I of course made an ass of myself by screwing up the story of a friend of mine whose sister in law is a friend of Colleen's, and mixing up the ex-wife with the current wife. No wonder she looked confused at my story!

Anyhow, some of the recipes in the cookbook have like, 3 ingredients which always gives me pause, I am not sure (aside from broiled asparagus with tamari and toasted sesame oil), how a three ingredient recipe could ever be good, but this one had a lot of ingredients and so looked promising. Also, we had both roasted red peppers and carrots on hand. We also had a sweet potato, rather than regular potatoes so I decided to diverge somewhat from her recipe and do my own thing. Why normal rather than sweet potatoes are used in the "orange" chapter of the book is unknown.

It turned out super duper yummy and we both loved it a LOT!

So, the photo doesn't look so hot, but man, is this a GOOD soup. 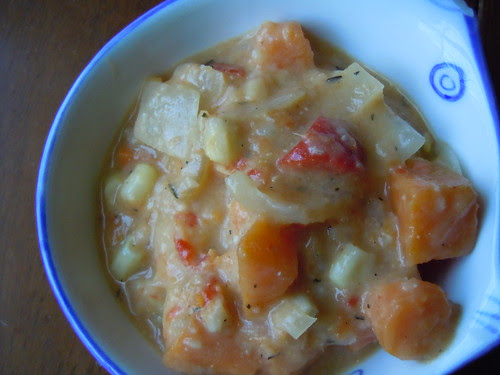 In a soup pot, place the onions, carrots, sweet potato, vermouth, salt, thyme and garlic and saute for about 10 mins. Then add the water and roasted red peppers, and simmer for about 20-30 minutes or as long as it takes your sweet potatoes and carrots to get tender. Then add your frozen corn and stir till its no longer frozen, and the 1/2 cup ground cashews. Then use an immersion blender to blend some of the stew, leaving some of it chunky. You will be happy to eat this soup, because its yummy!
Posted by Sarah at 5:56 AM

These tostadas have absolutely nothing to do with Mazatlán, it just so happens I lived there for 6 months and these tostadas needed a name. My parents came over to stay for a night and I asked them what they were interested in eating for dinner. My mom said "remember that black bean mango thing you made that time?" I did not, but I whipped this up, and I think everyone was happy with it. I know Jon and I loved it, but you know when guests come they pretty much have to say they love what you make*. I know I'll be making it again someday, sooner if I wasn't such a weirdo who insisted upon eating recipes I've never made before all the time.

*for some reason vegan mac n' cheese does not fall into this category. 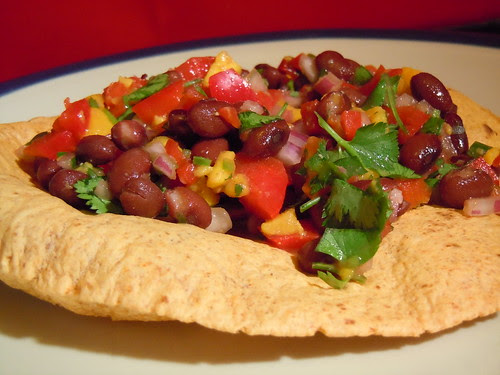 Wash and dry your cilantro (in a salad spinner or with paper towels). Chop. Put in a large bowl. Open your cans of black beans, drain and rinse. Peel and dice your mango (or, if using frozen mango, thaw in the microwave until not frozen but not hot and dice) and add to the bowl. Peel and dice your onion, and dice your red peppers and jalapenos and add to the bowl. Slice 2 limes in half and juice (you may need a 3rd or even a 4th depending on how juicy your limes are), and add 1/4 cup of the juice to the bowl. Add the cumin and cayenne pepper, and toss all the ingredients to mix. Salt lightly to taste. Mix again. Let the mixture sit for a few minutes as the flavors will strengthen a little with time. While those flavors are melding, put your flour tortillas in the toaster oven and toast - watch it though because you want it to get stiff and crisp, not burned. Once your tortilla is stiff and slightly crisp remove and do the same with the remaining tortillas.

Place about a cup of the mixture onto a toasted tortilla and serve.
Posted by Sarah at 5:45 AM