I was pretty shocked that in searching for studies of competitive eating, I was only able to find a single one. Naturally, as a scientist, I am intrigued by the concept. Nonetheless, I decided that it would be better to volunteer all day at the DC Veg Fest than to enter a vegan cupcake eating contest and likely end up feeling sorry for myself all day. As it turned out, I did both. A last minute no-show for the cupcake contest left an empty chair, so I decided to fill it. My stomach was already in knots from a very busy morning of volunteering, and I'd just had too much, but hey: there's always room for five cupcakes.

The basic premise was simple: whoever could eat 5 cupcakes the fastest (with no hands and no water) would be the victor. This was harder than I thought it would be. I basically bit the first two cupcakes in half and swallowed them without chewing, thinking this would both be faster and avoid wasting valuable saliva. Sadly, it turns out that swallowing things whole makes me want to puke really bad, so after that I had to slow down and chew lots and focus on pretending all was well with my stomach.

Shortly after this picture was taken (while I was eating the third cupcake), Doron Petersan (owner of Sticky Fingers bakery) grabbed my shoulders, started shaking the hell out of me, and telling me to chew faster. This required heavy concentration to prevent urgent vomiting:

Once she let go of me and I could calm things down a bit, I was able to take stock of my competition. I was hoping someone else would be winning so I could slow down more, but no luck. I was clearly still in the running. I decided to step up my game.

Meanwhile, the other competitors were doing the same.

You can see a wide shot of the end of the contest here (note my very clean plate and not very clean face:

Being an honest lad, I wanted to follow the rules which meant a totally clean plate, and a totally empty mouth before I could declare victory. But in the end, even though I still had a bit of chewing to do, I was declared the Regretful Cupcake King. My face pretty much says it all:

My prize? A mug and three more cupcakes, including this lovely gold-dust one: 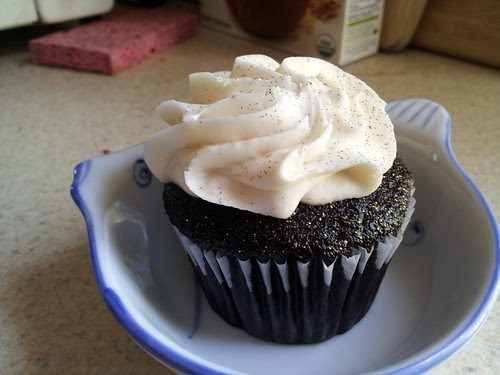 Afterwards I still had anther 3-4 hours of volunteering to go, so it made for a rough afternoon, but perhaps it was worth it for the glory and the learning experience.
Posted by Jon at 7:16 PM No comments:

I won at bowling

I have been super busy with school, three graduate courses are keeping me on my toes!  But I did have time to go bowling on Saturday. 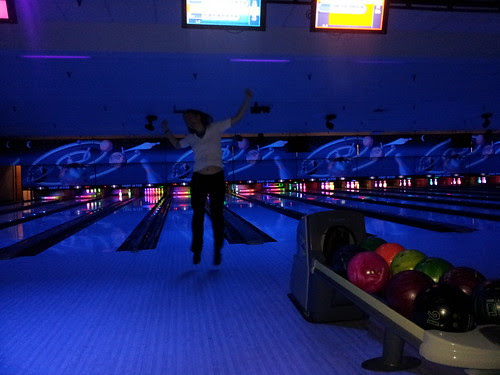 Vegans can levitate.  Have I mentioned this?

This joyful dance was after my one and only strike.  Nonetheless, I still got the highest score of....100.  So we're not bowling experts!  I think that only serves to confirm our coolness.

Given my busy schedule, I don't have loads of time to labor away in the kitchen.  I've been making things that are quick, and this dish qualifies as super quick, and super yum. 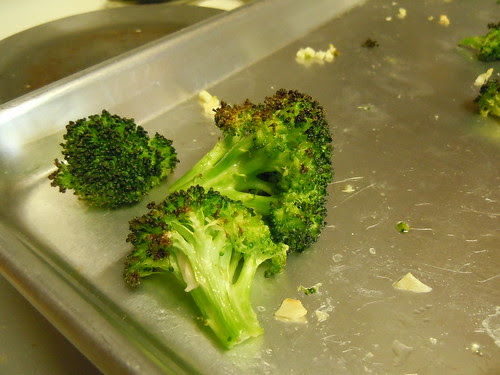 It comes out slightly crispy (hence the brown parts) from being under the broiler - delicious!

Chop 1 TBS of awesome farmers market garlic and place in 1 TBS of Oil to marinate for at least 1 hour.  I left mine overnight.  Mix in 1/4 tsp fine salt into the oil/garlic.  In a big bowl with a lid, combine the garlic/salt/oil mix with the broccoli, and shake it all around a lot to ensure even coating.

I broke up the really big chunks of broccoli from the bag so they would cook evenly, and placed the teeny ones in the center all crowded, and the big fatties at the edge spaced out to further even out the size/cooking time discrepancies.

Broil on high for 5 minutes, then flip each piece, then broil 3-5 more minutes (depends on how intense your broiler is, keep a close watch, broilers can burn things up super quick). Enjoy.
Posted by Sarah at 7:47 PM No comments:

I will be brief. We tried to make homemade dog treats for our dog's 4th adoption anniversary (aka 6thish birthday), and they sucked. They didn't ever get crispy, even when we overbaked them. Our dog likes them (but then again, she considers a kale stem a treat, to be gnawed on slowly like a bome), but one of her friends spat it right out when we gave him one. They are cute, at least, due to an eternity spent cutting out little fall shapes (oak leaves, maple leaves, normal leaves, acorns, apples, and pumpkins, plus one dog): 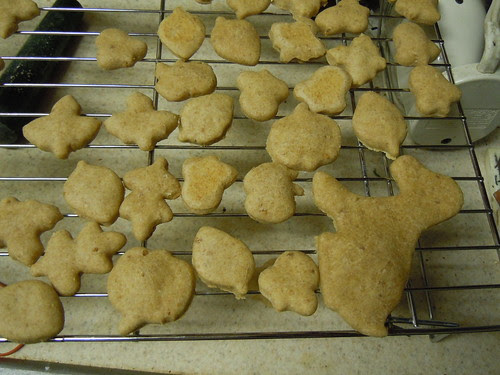 We used the recipe from http://the-dairy-free-diva-recipe-exchange.yumsugar.com/All-Natural-Vegan-Dog-Treats-14252489 although to be fair we didn't have quite enough peanut butter so we topped it off with tahini and a bit of almond meal. Alas.
Posted by Jon at 4:34 PM No comments:

Chard Week at the Fishbands

We received a warning note from the Condo Board this week about our 'guerrilla garden', indicating that we had a month to remove the plants (including our very good-looking chard, which could practically be considered a decorative plant), or they would be pulled up for us.  Jon had already pulled up the tomato plants at my urging, because they were hardly producing anything and an eyesore anyhow.

This inspired a week long chard-centric menu in the Fishband household (a combination of our two last names, in case you were wondering).  First up was Color Me Vegan's Swiss Chard Tart.  Jon kindly made this solo while I recovered from filming the Rosslyn Jazz Fest a little too soon after surviving a killer cold.  He made two modifications.  The first was he didn't add any oil to the cashew cheese portion of the recipe.  He didn't replace it with anything - just omitted it.  The second was he didn't add as much salt as the recipe called for and it was still plenty salty. 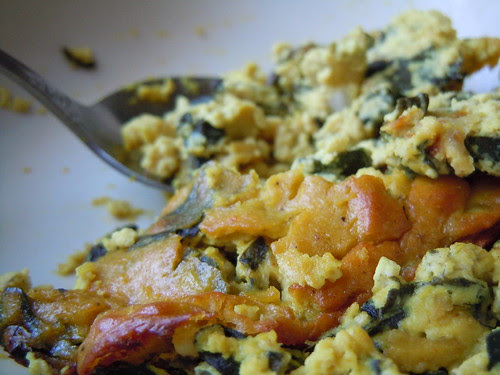 It turned out really well.  The texture is much more like a fluffy eggy-style quiche than my favorite vegan quiche recipe from Voluptuous Vegan (dang, that is a good quiche though!).  It wasn't overly chardy, which is helpful because we have to eat it every meal this week - best not to get sick of it too soon.  We'll also be eating Vegan Yum-Yum's Cheezy Chard toast points (so incredibly good, you should make those), and some chickpea crepes from VegNews that we'll sneak some chard into.  So no recipes anytime soon.

I did "invent" a soup recipe last week to help with my cold, which was 4 cloves garlic, 1 onion, 3 small sweet potatoes, a bunch of collards, and about 2-3 cups okra, plus 3-4 TBS of berbere spice mix, but the problem  is that, while tasty, the okra unfortunately gives it the look of goopy boogers when you scoop it into your bowl, so I can't wholeheartedly endorse that recipe due to its visually disturbing nature.

I am now a full time graduate student which I naively thought would give me loads of time to experiment in the kitchen.  However, so far I've been spending a lot of time reading textbooks and course materials, working on homework, and attending class.  Hopefully once I get my routine down I can spend more time having fun with new recipes.  I'm especially excited about making Miyoko Schinner's vegan cheeses.  I'm not sure if anyone else fell of their chair when they noticed, but Lauren Ulm of Vegan Yum Yum fame is back blogging again!  I was really pleased, her blog is such a pleasure to read and to look at.
Posted by Sarah at 2:07 PM 1 comment: