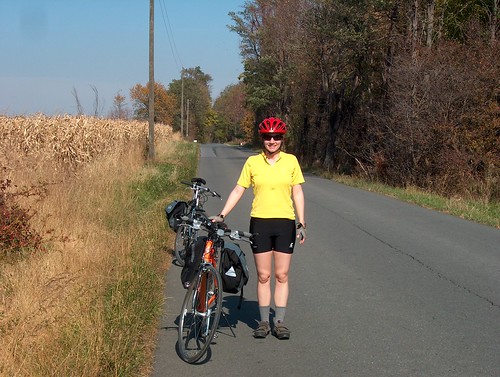 As an adult, the first job I ever biked to was just two relatively flat miles from my house.  I avoided biking when it rained or when it was cold, and I usually just wore my work clothes since I didn't work up too much of a sweat on the way.  In any case a shower was definitely not required, which reduced the complexity of my bike commute considerably.  I'd throw on my backpack to hold my wallet, lunch, and bike lock, and I was good to go.

When I started looking for a new job, I actually only looked within a 5 mile radius specifically because I didn't want to have to bike any further!  Luckily, by that time my radius was pretty close to the city and I was able to find something just at the five mile mark.  My new workplace had a shower - another requirement I'd had for any new job; and during D.C. summers, you really do want to shower after biking five miles.

Since my new ride was much more urban, I had to contend with cars turning suddenly in front of me, delivery trucks parked in the bike lane, cars stopping & turning without warning, and the worst fear of all - the fear of getting doored.  I'd heard awful, horrible stories about this - where someone opens their car door a half a second before you get there, and with no time to react, you slam into the door full speed, possibly flipping over it, possibly getting thrown into oncoming traffic.  Many things can happen - all bad.  Although in some cases the cyclist can't do much of anything, it's always a good idea to check your brake pads to make sure they're good and thick.  Once they get worn down they provide MUCH less stopping power.  I speak from personal experience as a person who let her brakes get too worn down.  It's really surprising how much quicker you can stop with new brake pads.

I started out carrying my toiletries bag, towel, work clothes and shoes in a backpack.  There was a special bike cage in the parking garage, which was awesome.  One major drawback was my clothes still felt damp after hanging in a locker all day.  There was almost no air circulation, even though I left the locker door open.  Only one piece of clothing - my towel in this case - could be slung over the door of the locker.  I had a cubicle so I couldn't hang my clothes in my office.

I started getting back problems and wondered if it had something to do with carrying stuff on my back instead of in a pannier (a bag that can attach to a rear bike rack).  I went ahead and invested in a rear bike rack, and some slim black Trek bags to carry my gear.  The Trek bags were the cheapest bags in the store, which is why I decided on them.  This decision would come back to haunt me later.

At some point during one work day, the cleaning staff of the women's locker room actually threw away my towel and my expensive REI base layer (okay, slightly less expensive because I'd bought the children's size to save money, but still!).  You can replace a base layer, but that towel was the perfect size and thickness to bring to the gym.  It had worn down enough that it dried really fast, but still had enough wicking power to get the job done.  I was really mad, especially since now I had to close and lock the locker, and there was no chance of my gear getting even slightly dry during the day.

Various things happened, such as:

-Building management threw away my  hair drier I'd left plugged in in the locker room "for legal reasons", even though I'd taped up a sign next to it that said "use at own risk" specifically so they wouldn't remove it "for legal reasons".

-One day the showers only gave out cold water.  I skipped showering that day.

-Building management got a towel service for the locker rooms.  It was awesome, but I'll never forget you perfect towel!

-A woman from my company's upper management showed up in the locker room out of the blue one morning.  You really cannot see management naked or in any state of disrobe ever.  I can't stress this enough, it's just too weird.  Hide in a shower stall or bathroom stall for the next 45 minutes.  You can thank me later.

-I got an office, with a door! I brought in some hangars and hung my clothes behind the door.  They finally got dry during the day.

-I went from being a white-knuckled, granny-paced, hyper-vigilant stress ball to actually enjoying myself.

For some reason, when you bike five miles to work, even though you have some evil hills to conquer on the way, no one will be impressed when you say "five miles".  Lie, lie like a rug.  Get some street cred.  Just tell them how long it takes you, and that will sound better.

I'm tired, so that's about all for today.  Next up - how I was betrayed by cheap panniers, the desperate cyclists' commute, winter bike commuting, and more...
Posted by Sarah at 6:40 PM No comments: