How better to celebrate Earth Day than with a soil cake? We didn’t just want a boring chocolate “dirt cake” with gummi worms in it; we wanted a proper soil profile with the different horizons represented (see the printout at the bottom of the photo below). In the end we discarded some of our more fanciful ideas and went with a relatively design involving 3 layers plus toppings. Here are the components prior to assembly: 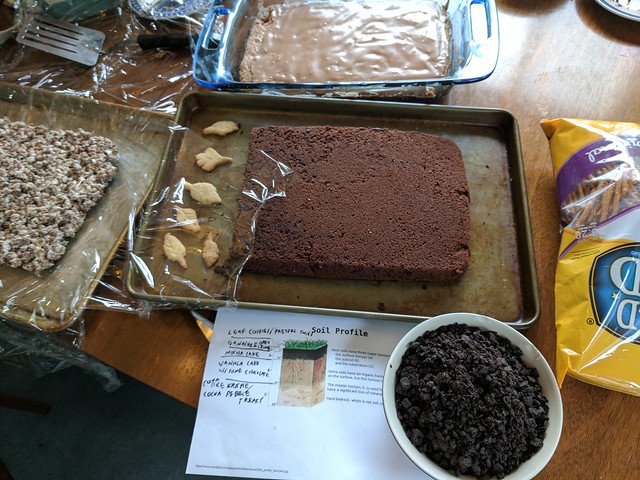 For the bottom layer (E horizon) we wanted “rocks” of different sizes so used the health food store equivalent of cocoa rice crispies and cocoa pebbles in a vegan marshmallow base (basically heterogeneous vegan rice crispie treats), shown at left in the photo above.


On top of that we wanted sort of a tan cake for the leached B horizon, so after considering mocha or spice cake we kept it simple and went with a vegan vanilla cake recipe and just added 1.5 Tbsp of cocoa powder. The cake recipe was terrible though, so this layer came out fairly dry, and next time I’d use a tried and true vanilla recipe before mixing in a bit of cocoa. We put basic powdered sugar icing (with a bit of cocoa to match the color) above and below this layer to help bind it to the other layers (top cake in photo above).


The top layer was a mocha cake (the bottom cake in photo above), lighter than a pure chocolate cake but still a nice rich brown for the A horizon. Then we put a mocha ganache on top of that to hold the oreo crumble on top (we used oreo thins with chocolate filling), and topped with a few sugar cookie “leaves.” We also planned to have pretzel stick “twigs” but the dog got into the bag of pretzels the night before so had to give up on that.

Here’s how it looked once assembled: 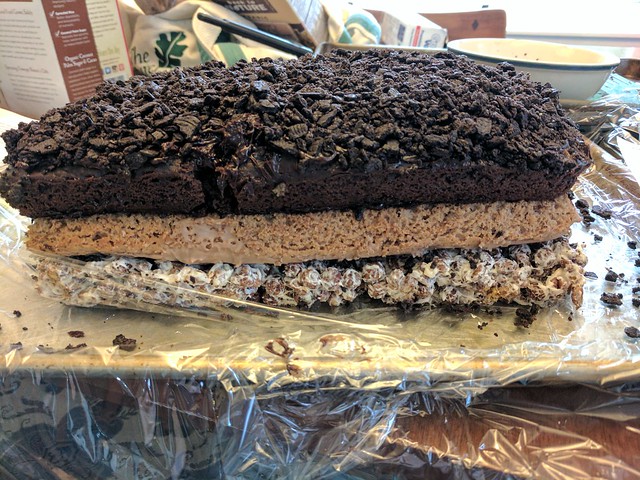 Once it was assembled we cooled it in the fridge before cutting the edges flush for a neater look: 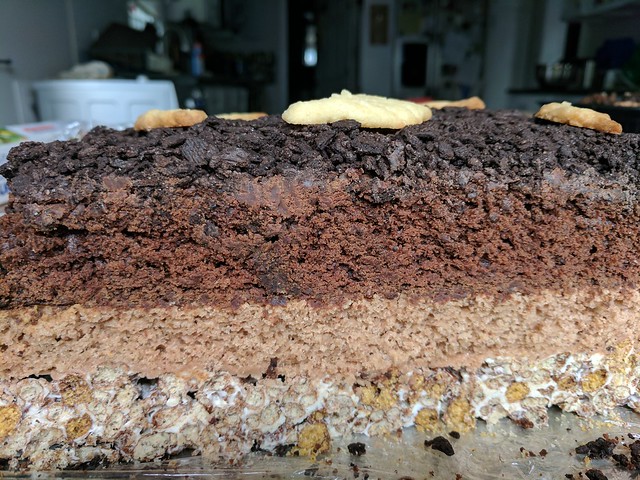 Here's an oblique shot from above: 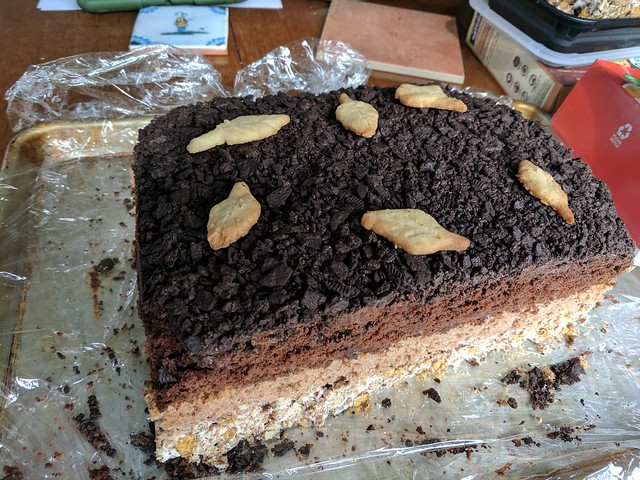 Sadly the time in the fridge dried out the cake a bit, so we had to serve it with vegan Breyer’s cookies and cream, and poured some of the new vegan Bailey’s Irish cream on the cake as well.  But that's not an awful worst case. We had some of the leftovers in glasses as a trifle and it worked pretty well.


We also wanted to make roots / mycorrhizae out of white cotton candy which we could jam into the cake, but couldn’t find it. But a simpler idea would have been to bend up a hangar into a jagged shape, poke several sinuous holes in the cake from above, and fill each with thin white icing, so that when you cut into it you can see the roots. Next time!