I've come up with a lot of recipes in my life, but this is probably the one I'm the proudest of. The idea came about on a trip to Urbana in 2007, and after perfecting it it's been a holiday staple ever since. It's fairly simple to make, here's how.

*You may want to use extra vodka in each of the three infusions, both because it lets you tweak the flavor balance better, and because it's always nice to have extra of the component vodkas (e.g. the cinnamon-clove vodka is good in apple cider). I like using Russian Standard (which is really good), but if you want to save money Svedka probably has the best ratio of quality to price. Also, using a good dark rum (e.g. Barbancourt) instead of vodka for the 250 mL that gets infused with cinnamon-cloves will taste even better, but it's harder to tell when the infusion is done using color as a guide, since it doesn't start clear. So you'll have to taste it more often.

Pour the vodka into three containers: one with 500 mL of vodka, and 250 mL of vodka each in the other two containers (or ideally have at least 50mL extra of each so you can adjust the flavor balance at the end).  Add the ginger to the 500 mL, the lemon to one 250 mL, and the cinnamon and cloves to the other 250 mL. Cover and let them sit at room temperature. The lemon needs at least 2 days to be good, but it's OK if it sits longer. The cinnamon-clove is usually ideal after about 3 days, and the ginger sometimes takes longer depending on how strong your ginger is (4-5 days) - use more ginger if you need it to be ready faster! Basically taste each one and make sure you think it has enough flavor.

Here's what it looks like after 3-4 days (I started the ginger one day early, and lemon one day late): 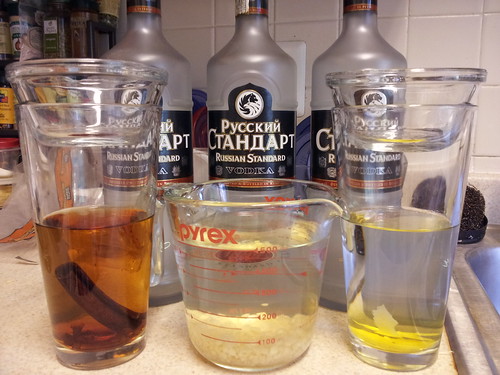 Using a strainer or cheesecloth, pour most (but not all) of each vodka into the original bottle and mix well. Taste it, and decide if you think it needs more of any of the three components (if so, add them). If you like it as is, add the rest of the vodka. Sometimes one component ends up too strong, so it's nice to be able to balance it at the end. Here's what it looks like after you've mixed the three infusions: 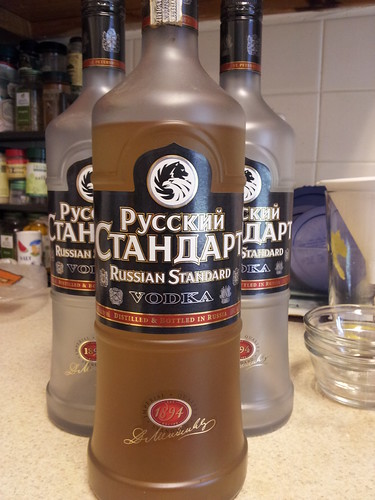 Finally, add 1/2 tsp vanilla and 3 Tbsp blackstrap molasses (or more or less of each according to taste) into the bottle through a funnel. Shake very well, until no traces of molasses are visible on the bottom of the bottle or the neck (the two places where it tends to accumulate). Taste and decide if you think it needs more of anything else. If you like sweet liquor, you may want to add more molasses or even some brown sugar. Here's what the finished product looks like: 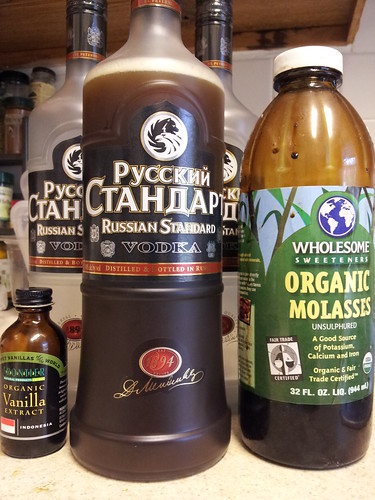 It is good straight or on the rocks, but just ludicrously delicious in soy nog (I like Silk Nog best). It cuts the inevitable harshness (even though Russian Standard is quite mellow, it's still vodka) and the creamy base allows the flavor to blossom in a way that never fails to surprise and delight me. If you can't get vegan nog due to the season, unsweetened vegan creamer, or a mix of vegan milk and melted vegan ice cream can be OK in a pinch. Let me know how it works for you in the comments! I've made many many liters over the years and people still go nuts for it every time. In fact, this year for Halloween I'm going as the gingerbread man and will have a bottle of this (and a sack of ginger snaps) to share with the world.
Posted by Jon at 4:06 PM 1 comment: