In my senior year of college, I studied abroad for six months in Sinaloa, Mexico. I adore Mexican cuisine, which has much more variety and nuance than you'll find at a typical Mexican restaurant in the U.S. It was there I discovered delicious nopales, which are fleshy cactus leaves that were available fresh in the grocery store whole with needles, whole without needles, chopped, and chopped and cooked. I had the good fortune of living with an awesome Mexican roommate whose father happened to own a cheese distribution business, so I got to eat some delicious cheeses. One of the cheeses that was new to me was called queso fresco. Its about as firm as extra firm tofu and its crumbly, salty, and has a mild but addictive flavor. The closest food store sold queso fresco made by nearby farmers, and I loved it
Obviously once becoming vegan, queso of any kind was no longer in the cards for me. I hadn't ever tried to replicate this cheese with vegan ingredients until Jon's Mom sent me a bag of pepitas (among other things) for my birthday. I googled pepitas to see what I could make with them, and found a recipe that included queso fresco. I looked at recipes to see how I could recreate queso fresco, but when it came time to actually make it, I realized our recent power-outage-induced fridge cleaning meant I didn't have a lot of my staples handy.

After a little cabinet digging, I found some preserved lemons we'd received from Jon's sister in law (and brother, but who we kiddin'?). Since we hadn't figured out what to do with them yet, I figured now was as good a time as any to experiment. After some neighborly jar-opening assistance (Jon was out of the house), I de-seeded one lemon and added it whole to the food processor along with one of the red chilies in the jar. I was too busy to press the tofu, but you really should, because this came out as a thick cream which was too wet to mimic the texture of queso fresco. Who cares? It was yummy!
I even drew you a little picture of the jar of preserved lemons. Why didn't I pursue my clearly innate artistic ability? Well, that is a question for another blog post.

Directions: Throw everything in the food processor and press the on button. Wait till you can't really see any lemon bits larger than a small fleck. Chill and serve.
So far we've used some in a salad, I dipped Salsitas (insanely delicious spicy tortilla chips) in the queso, and I'm on the fence if I should use the rest in a 7-layer dip, or make quesadillas. Quesadillas are so darn easy...I think they may win.

I used to be a huge Subway fan before I went vegan. In fact, aside from cheese pizza, the Subway veggie patty was one of the last things I gave up. When I heard that Subway was actually going to offer three new vegan sandwiches at select locations near me, I was incredibly excited. I dreamed of my old Subway days, bread doused in vinegar and oil, oregano, onions, tomato, and I LOVE the baked lays potato chips* you can get with your combo. Very shortly after they started offering the vegan sandwiches, Jon, Colleen and I made a pilgrimage to Alexandria, VA in order to try out the new sandwiches. Since it was Old Town, the subway was super classy inside, with a natural stone wall, and opera playing in the background. Yes folks, OPERA at Subway. They had the Riblet (made with bbq seitan riblets) and the Malibu Greek (made with a veggie burger) sandwiches available, and also a vegetarian chick'n sandwich, which we wished we could try. We tried asking about whether the chick'n patty itself was not vegan, or just that it came with mayo or cheese that made it not vegan, but there was a language barrier so we gave up. The gentleman who made our sandwiches asked what we wanted other than the vegan meat, and I said 'whatever normally comes on this sandwich'. He kept looking at the picture of the sandwich they had hanging up, and since the Malibu Greek looks like it has cheese on it, he put cheese on the sandwich. We explained that cheese wasn't vegan so we couldn't eat it.

For the Malibu Greek, we ended up with lettuce, tomato, olives, banana peppers, and an oil and herb dressing, after determining that they didn't have a specific dressing for the sandwich that gave it the 'Malibu Greek' name.   It was a fairly tragic sandwich I must admit [Jon says it wasn't bad, he thought it was worth eating].  Part of it is being out of practice with ordering at Subway - I really should have gotten the oil and vinegar plus oregano, salt and pepper of days of yore, but a lot of it was just poor quality vegetables, and a lack of an overall sandwich design vision.  If you're calling a sandwich Malibu Greek, the sandwich should have some flavors that evoke those two concepts.  There wasn't very much flavor in the sandwich at all. 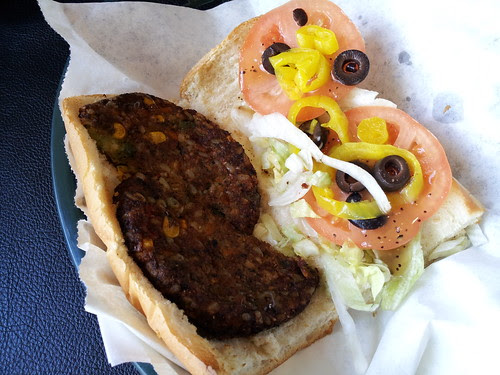 Malibu Greek (neither Malibu nor Greek).  Note how incredibly pale and weak both the tomato and lettuce are.

On to the Riblet!  You can't really go wrong with a Riblet.  It's already got the flavor and sauce built into the vegan meat, so you don't have to worry about making it tasty.  If I'm in the vicinity of a Subway, I would definitely order this again.  However, I wouldn't make a special trip, because I can buy prepackaged vegan riblets at most grocery stores in the DC Area. 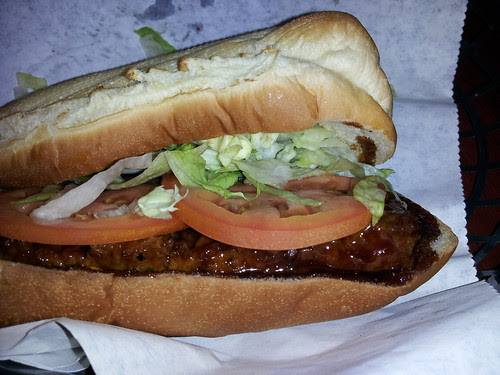 Riblet.  It can't not be tasty, its a bbq riblet.

I hope that they will train their employees more thoroughly on what to put on these sandwiches (if there are specific items that should come with each sandwich), and also not to put cheese on a vegan sandwich unless specifically requested.  I also hope they come up with a great vegan dressing to put on the greek malibu so that more people will order it.  I want these sandwiches to be successful so that they will start offering them at more Subways, and feel that they need to improve quality to ensure the success of these new sandwiches.  I would love it if they offered vegan mayo and Tofurky deli slices for their sandwiches, that would draw me in for sure.  I would make the trip to Subway much more frequently for nice Tofurky mayo sub.

*apparently I am some kind of weirdo for loving baked lays.  no one I talk to seems to like them at all.
Posted by Sarah at 7:06 PM No comments: