I was curious to try the new "Beyond Meat" product at Tropical Smoothie Cafe. I'd had it a couple of times other places but it was always super bland and not that good. These looked better, but I was curious what non-vegetarians would think. Often I think fake meat is not that realistic, while other veg*ns think it's just like the real thing.

So I bought several sandwiches (Thai peanut, Jamaican jerk, and buffalo) for myself and 6 of my colleagues and we had a taste test. Here's the pile of sandwiches before opening: 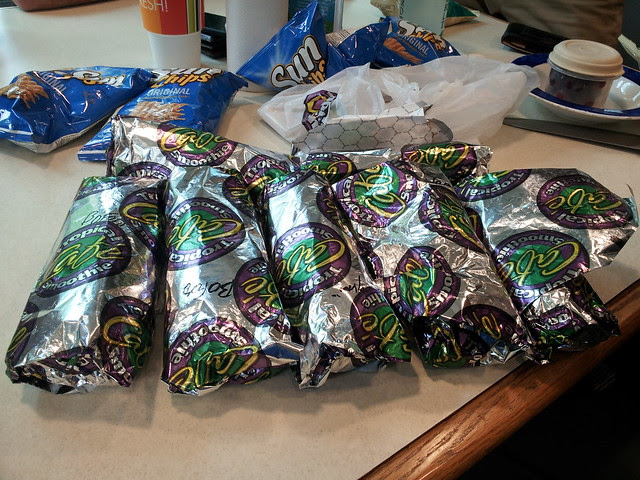 The ratings for "overall quality / deliciousness of the sandwich" on a scale of 1 to 100 came out at a mean of 80.8 (ranging from 70 - 90). The ratings for "chickenness" of the beyond meat (as compared to a similar sandwich from Cosi or something) had a mean of 79.4 (68-90). One participant noted that it wouldn't pass for a good roast chicken, but was virtually identical to the generic chicken you get in other sandwich shops.