Jon bought 6 eggplants at the farmers market in his enthusiasm for the different skin colors and shapes. We hadn't decided what to do with this aubergine bounty, but he had suggested Baingan Bharta. I checked out the Dakshin Vegetarian Cuisine from South India (whew, what a name!) cookbook to see if they had a recipe, because our Baingan Bharta "recipe" is more of an outline and I wanted some tasty Indian food. I didn't find Baingan Bharta, but there was a similar enough dish called Eggplant Rasavangy which I used as a guideline.

The dish calls for Sambar powder, which we didn't have but it gives a recipe, which I made a variation of. 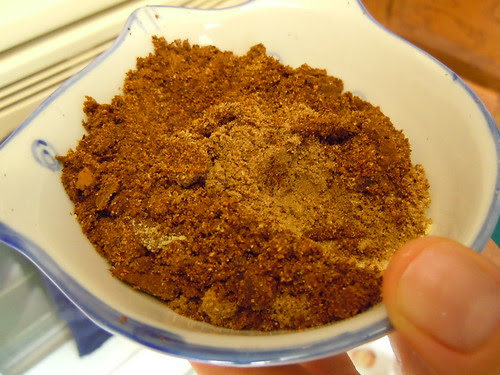 I separately fried up the red chillis in about 1 TBS of oil. Then I took all of my whole spices (peppercorns, cumin seeds, mustard seeds, cinnamon stick, my rinsed dals and curry leaves and roasted them in a dry cast iron pan (removing the curry leaves once they looked dry/crispy), until the mustard seeds popped for about 20 seconds and removed from the heat. Once my red chili peppers had fried for 3 minutes I removed them and placed on a paper towel to get the oil off since I was concerned about gunking up my seed grinder with oil. I put the red chilis and whole spices into the seed grinder and whizzed til finely ground. Set aside - you will only use a portion of this powder. 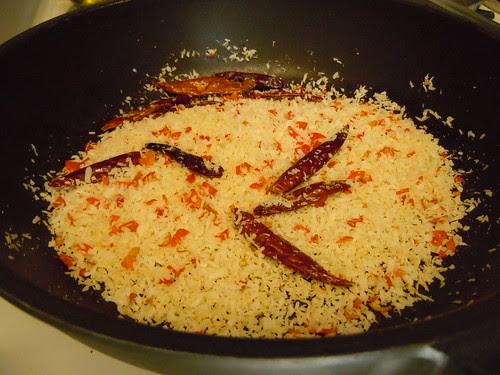 I fried the serranos and dried red chilis in the leftover oil from the previous chilis for a few minutes, then added the coconut and toasted, stirring frequently, until it turned light brown. Then I removed from heat and after cooling a bit, ground it up in the spice grinder.

I cooked up 3 cups of red lentils in an ample amount of water until they were super duper soft and any extraneous water had evaporated off. Sorry for being so inexact but I'm sure the Internet can tell you the right proportions. 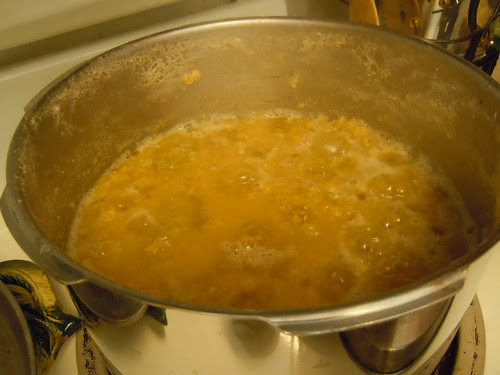 Jon was kind enough to chop up about 2 cups of onions, and about 6 cups of eggplant so all I had to do was clean 4 cups of cherry tomatoes and stab each with a knife so they would cook down nicely and not remain whole (don't know if that was needed, but did it anyhow). I added 2 TBS earth balance, 3 curry leaves, 7 more dried red chilis, 3 teaspoons of mustard seeds and the onion to the electric pressure cooker and set it on brown. Once some of the onions had started to get brown I added the eggplant and tomatoes and set it to high pressure for a few minutes time. It didn't actually get to pressure, but I was trying to get the eggplant and tomato to cook down enough that I could actually stir it, because before it was so full I wasn't able to stir without things falling out. Once I had stirred it I set it to five minutes on high.

After it beeped, I drained off about 5-6 cups of tomatoey/eggplanty water and reserved it for some other dish (lentil soup!). I removed the 7 whole chilis. Then I added the cooked red lentils, coconut paste, 2 TBS + 1 tsp of Sambar powder, 1/2 TBS asafoetida powder, 1 tsp tamarind liquid, 1 TBS brown sugar, and 1 tsp or 1.5 tsp of salt. At this point I wished I'd put less chilis in the coconut paste because then I could have added more sambar powder, such a more nuanced flavor, and still had an appropriate amount of heat in this dish.