We continue to enjoy drinking homemade alcohol-free beer whenever one of us can't drink (most recently while my broken pelvis heals). My friend Emily was intrigued (we were discussing it when she was pregnant) but prefers stouts, and we hadn't done anything beyond the one kind we've made (which is sort of like a session IPA, see http://veganladyeats.blogspot.com/2014/09/homemade-alcohol-free-relaxing-beer.html).

But always up for a challenge, here are the tweaks to make stout. First, rather than making the hops extract one batch at a time I've switched to making a big container of it, and then using about 1/2 cup of that plus sweetener and club soda. So for stout, I took the 1/2 cup of cold hops tea / extract, heated it up in the microwave until it was almost boiling, and then put in a fake coffee teabag (Teecino Vanilla Nut flavor). I put it back in the fridge again right away and let it steep and cool for about 4 hours. For sweetener I used Yacon syrup which is a new thing we just bought; it's a tangy and lightly sweet dark brown syrup made from some Peruvian root. I thought of molasses but didn't want that heavy iron flavor molasses has.

Here is the final result being enjoyed, it came out pretty good! It definitely has the roasty malty stout flavor, without any alcohol and with very few calories. 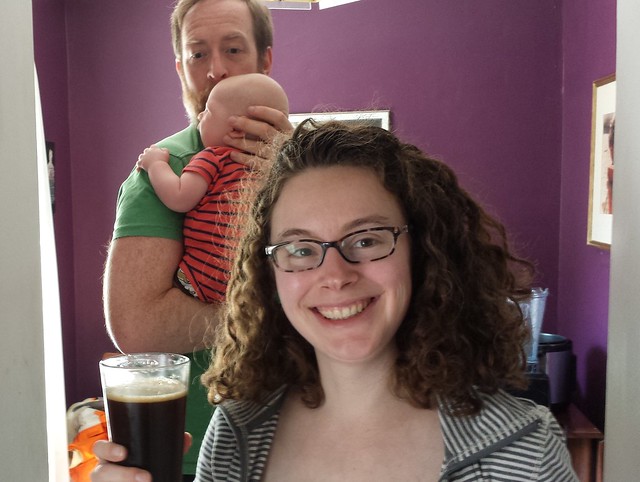 My next step is to figure out two things:
1. If I can soak some additional hops in the extract to add back in the aroma and more complex flavor lost when I boil down the extract.
2. I want to try proofing maybe 1/16 tsp of yeast when the beer is being put together to drink to add in a bit of yeasty flavor, without giving the yeast time to make any actual alcohol.
Posted by Jon at 1:06 PM 3 comments: