The saga continues!
For the second day we had tofu scramble and hash browns again. This time Sarah added enough other ingredients to the tofu scramble for her to be able to choke it down, and again the hash brown was pretty good.

Lunch:
We did better than the previous day, w/ Sesame Tofu & Vegetables and Baked Cauliflower and Broccoli: 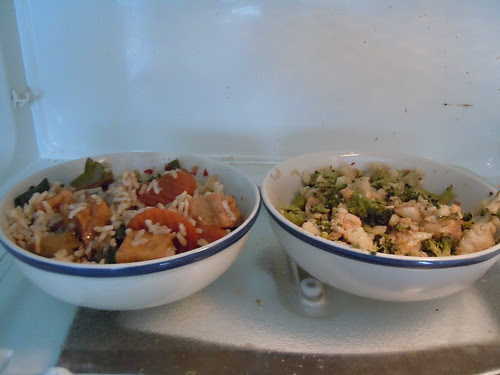 The sesame tofu and vegetables (on left) was actually pretty good (no complaints), although it was odd that although the instructions said to serve it over rice, we didn't receive any rice in the package. Fortunately we already had some prepared to eat it with.

Sadly yet again the cauliflower / broccoli dish tasted like vinegar and in general off-tasting, so presumably it too was somewhat spoiled.

For dessert we had the "carrot coconut scamble" but it was just shredded carrots, coconut, and agave nectar. So not really gross, but not really dessert either. Just OK and odd.

Lunch, Day 2:
I had the Lentil / Cauliflower Curry and the Coriander Courgettes: 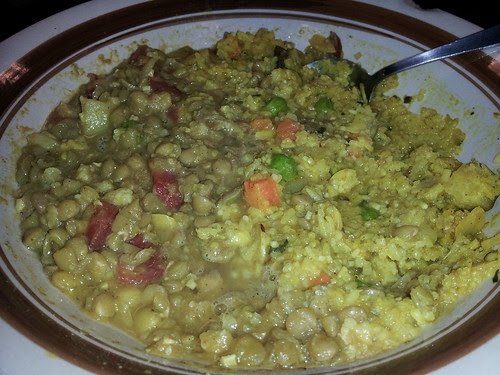 Surprise! They tasted of vinegar! Otherwise they were both actually sort of good, but by the time I was almost to the end I had a stomachache again and couldn't finish it (not due to quantity, I'm a big eater).

Sarah had half of a Texas Caviar (good, too salty but otherwise had good flavors) and the Paella (good, sort of peppery flavored, not gross but if we had made it we wouldn't make it again). Fortunately they weren't vinegary tasting at all so presumably they were frozen more quickly after being made.

Once again for dinner we had to eat normal food. We're almost done!
Posted by Jon at 5:10 PM 1 comment:

We saw one of those group buy deals for 50% off a week of frozen homemade vegan meals delivered to your house (from Gobble Green), and since we knew Sarah would be extremely busy in the week before her final project for school was due we thought it would be fun to try.

The first wrinkle was that when we ordered our food, it was scheduled to arrive a month later. They indicated that you can get it next week instead by ordered $25 of extra food, so we did so thinking it would arrive on Monday or Tuesday. After a week of not being able to get in touch with them by phone and having a few cryptic and unhelpful email exchanges it finally arrived on Saturday, without the extra food we ordered (hopefully we don't get charged).

Anyway, aside from the customer service issues (perhaps they are overwhelmed by the response to their group buy offer), here's the rundown on day one of the food. 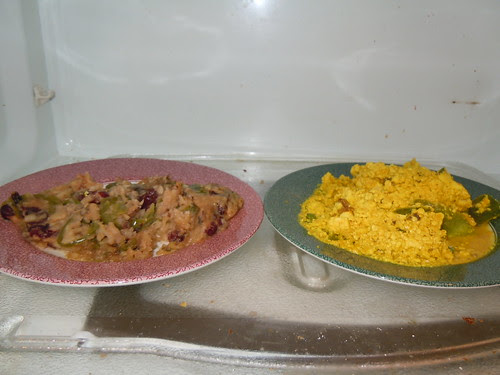 The hash browns were really tasty (although not crispy like hash browns usually are), but the tofu scramble was inedible (it tasted like plain tofu with vinegar, and adding salt did not help). Definitely the worst tofu scramble either of us had ever had; I really hate wasting food but couldn't finish it. Perhaps the tofu had gone bad?

We also ate a strawberry steel cut oatmeal (which Sarah liked, but I thought was too sweet and funny tasting, although the texture was good) and a delicious peanut butter cookie (it looked like fake meat when it arrived, but was quite good nonetheless). 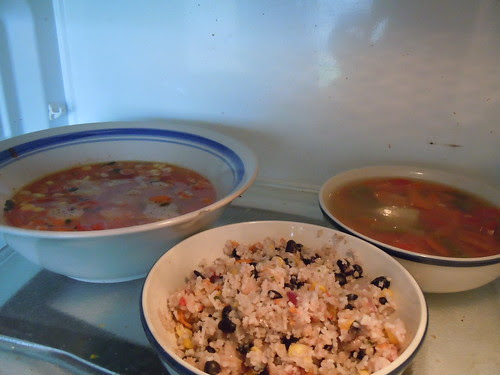 I thought that the Southwestern Salad was OK, but bland and too sour (so I added some agave, salt, and Sriracha). Sarah thought it tasted vinegary and "indescribably wrong" and "chemically."
The Signature Vegetable Soup tasted to me like it had spoiled a bit, although to Sarah it just tasted like soup made from canned vegetables.
The tortilla soup was definitely the best of the three, but was (yet again) too sour / vinegary for our tastes, and pretty salty as well. I still sort of enjoyed eating it, but by the end I was ready to quit and couldn't handle another bite.


So lunch was definitely not a winning meal.I got a solid stomachache afterwards, so we ate normal food for dinner instead. It seems likely that several of these dishes were left out too long before being frozen since they mostly tasted "off."

We've been meaning to post about this dish for a long time because it was especially delicious. We started with the recipe from the vegan slow cooker, and then made lots of changes. 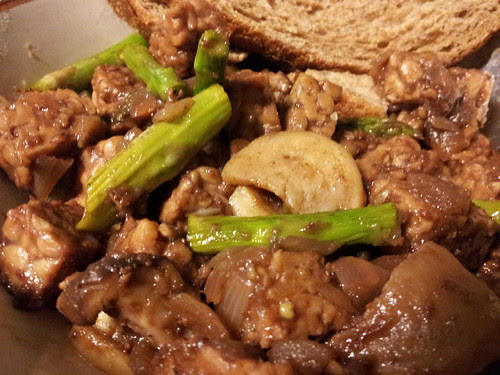 fresh rosemary & thyme to taste (I used about 3 Tbsp of each, you could use a smaller quantity of dried herbs)
1/2 tsp black pepper

1/4 cup fig butter (we got this from Trader Joe's b/c we couldn't find fresh figs and the dried figs smelled bad)
2 cups port wine (we used a zinfandel port, in retrospect I would have used a drier port instead)
1 Tbsp balsamic vinegar
salt to taste
1 bunch chopped fresh asparagus, with the tough ends broken off

Heat the olive oil in a big skillet, add the onion and cook until soft. Add the garlic and mushrooms and cook another 3-5 minutes or so until the mushrooms are nice and fragrant (these mushrooms rock). Add the tempeh and black pepper and herbs and stir well, then pour in the port, vinegar, and fig butter (mix it up with the wine so that the fig butter dissolves). Add a bit of salt (you can add more to taste later), and wait for the whole thing to get hot again. Meanwhile, stir fry the asparagus in another skillet in a bit of olive oil, and take it off the heat immediately when it's done (this is easy to overcook, so it's best to cook it separately, but if you're feeling lucky or skilled with timing, just add it near the end of the tempeh simmering). Once the tempeh mixture has come to a nice simmer reduce heat and cook about 15-20 minutes until the tempeh has soaked up lots of flavor and the whole thing has thickened up a bit. Remove from heat, mix with the asparagus, salt to taste (and you may need to add more fig butter to taste as well) and serve with a nice wheaty bread.
Posted by Jon at 7:10 AM No comments:

We have been delinquent in posting recently, partly because Vegan Lady is very busy with her final project at school, and partly because of the extra time it has taken to deal with our persistently gimpy dog. After 6 months of various treatments, lots of carrying her up and down stairs, etc., she is still limping. Scroll to the bottom of the post to see our current approach, which involved building a ramp for her to go in and out of the window to avoid stairs.

Also, here is some green hummus we made from fresh chickpeas. Well, they were frozen, but they hadn't been dried so they were still green. We used our standard hummus recipe (on http://food.veganjon.com). It was OK, not really any better or worse than normal hummus, just different: 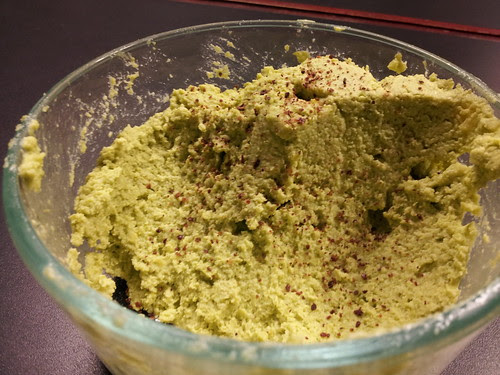 Here is the dog ramp solution: inside we have a store bought dog ramp, the one from the window to the grassy patch we built (out of some scrap plywood, recycled doormats, and lots and lots of time and screws and cross-bracing scrap wood for stability): 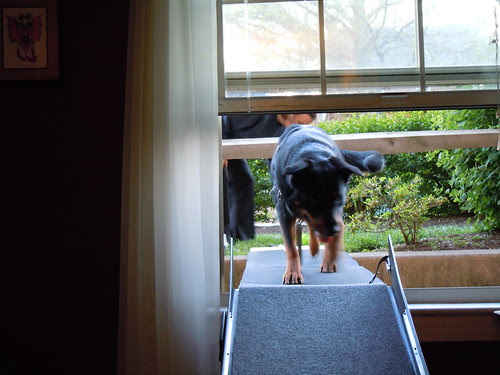 Even this was proving too hard on her shoulder, so now we lift her onto the coffee table inside first so that the slope of the inner ramp is much more gradual. But it is still a big improvement over the old method: 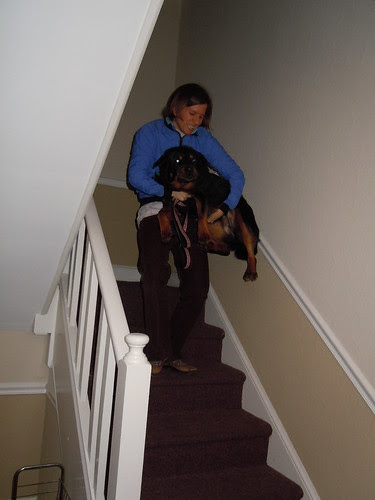 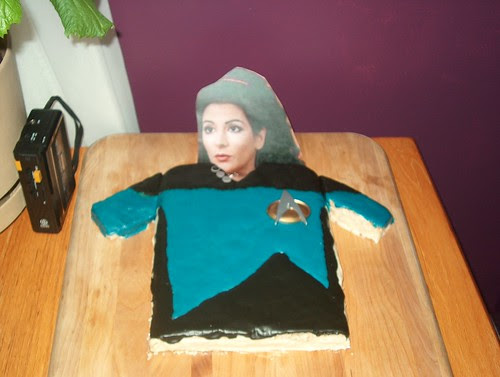 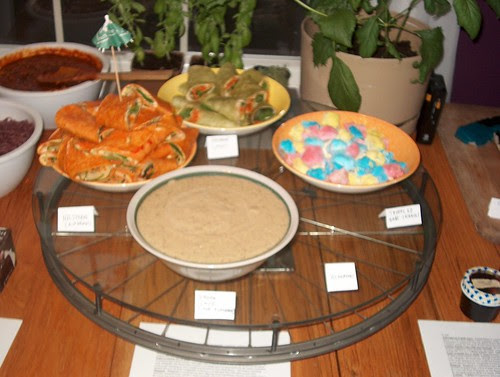 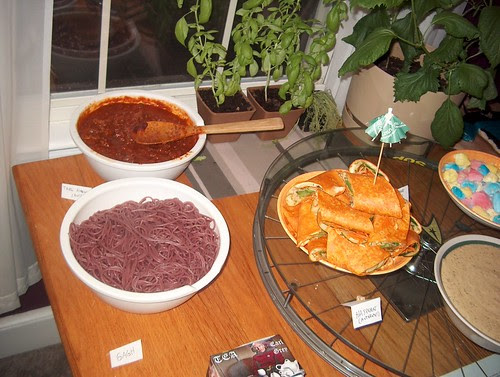 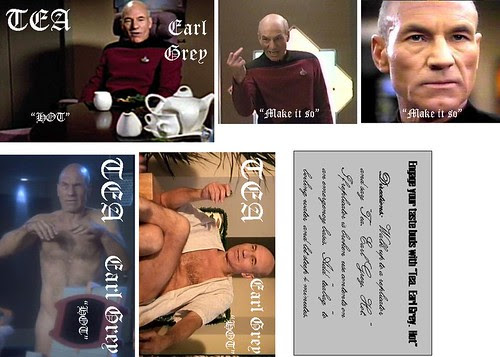 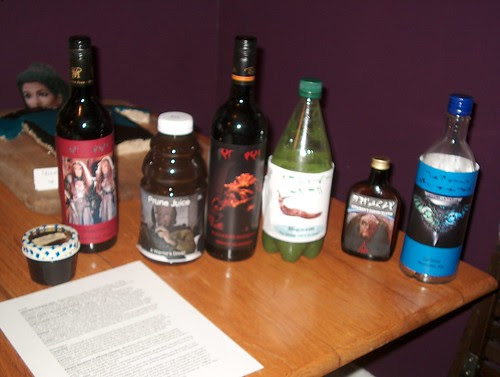 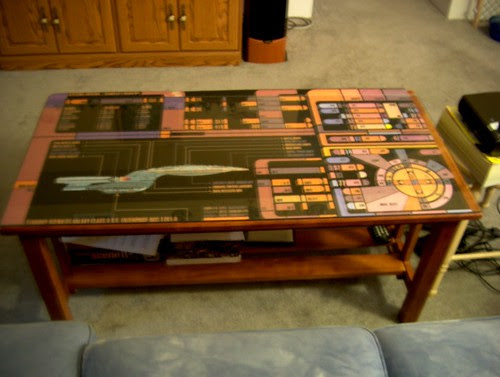 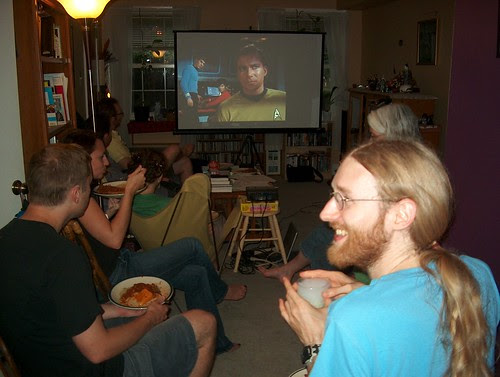 We still have all of our templates, so if you want to start with any of our labels and tweak the text on your own, or just have a higher quality version to print from, send us an email!
Posted by Jon at 10:48 AM 5 comments: