Sometimes we want to sit down and watch a movie and be lazy, but still have vegetables calling to us from the fridge nagging us about how they are going to go bad and we'll have wasted our money. On those days, we usually do all the chopping work in front of the TV - but this time, we took it to a new level and brought the plug-in pressure cooker out onto the coffee table, and did part of the cooking there too! If we were only making Ratatouille, we could have made the whole thing while watching a movie, but crazy me I wanted to make Ratatouille lasagna. There are a lot of vegetables here, but they do cook down. Even though it went above the recommended fill line, we jammed all the veggies in and it worked out fine. We have the Fagor 3-way 6 qt. pressure cooker/rice cooker/slow cooker. I have only used the pressure cooker feature, but I can't recommend this product highly enough to save time and hassle. We got Lorna Sass' Pressure cooking cookbook so we could take full advantage of it. Pressure cooking allows you to use less oil, and cook your food in half the time. Modern pressure cookers are extremely safe now as they have safety release valves so the pressure can't get too high. 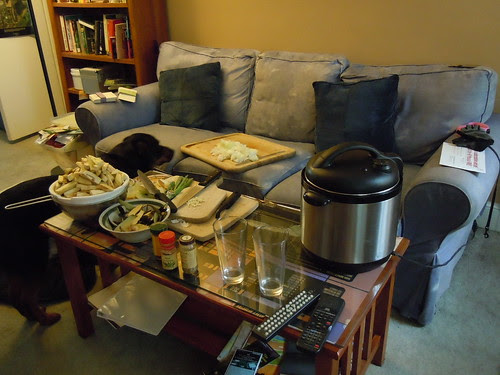 Above is our chopping & cooking setup in front of the TV. Note our dog Leeta wondering if that onion is any good to eat :)

This will be an even more ideal recipe for about a month or so from now, when eggplants are widely available from the organic stands at the farmers market. Its a great way to get a variety of vegetables into your meal while not being too "healthy" tasting.

For the Creamy Cheese Part: 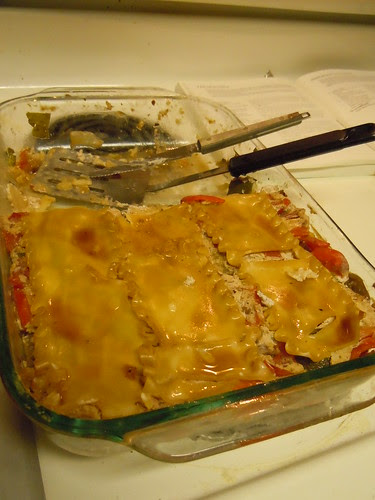 Its no beauty queen, but it sure does taste good!

Place the tofu between two cutting boards, and place a heavy object with a wide bottom (like a cast iron pan) on top for 15-20 minutes. This squeezes any excess water out, so you'll want it to slant slightly towards the sink so the water goes into the sink rather than all over your counter. Chop all veggies for the Ratatouille part - keeping the zucchini separate from the rest. Put your electric pressure cooker on the 'Brown' setting (or if you have a cooktop pressure cooker, put stove on medium), put 2 tsp of oil in your pressure cooker and wait till its hot. Add onions and the dried spices (bay leaf, salt, red pepper flakes, and fennel seeds - if you are using dried basil rather than fresh, add that now as well), and garlic.

While that is sauteing and you are stirring occasionally, put a large bowl of water in the microwave until hot ~5 minutes. Pour the hot water into the lasagna dish, and place lasagna noodles in to soak for 20-25 minutes - no longer! While they are soaking, go back to your onions. Once the onions are translucent, add the other veggies (eggplant, red pepper, tomatoes - not the zucchini) and bring up to high pressure and cook at high pressure for 3 mins. Pre-heat the oven to 350.

Now to prep your "cheese". Break up the tofu into a few pieces, and place into a small food processor (not a large one, otherwise you won't be able to blend properly). Add your cloves of garlic, lemon juice, and salt. Now add the chopped olives and capers, close up the machine, and run until the olives and capers are really well blended and it all looks smooth and uniform.

Drain the water off of your noodles and slide them onto a separate plate, make sure pan doesn't have any remaining water. Place your first layer of noodles into the lasagna pan. Drain your Ratatouille but keep the fluid you drained off*. Find and discard the bay leaf. Then add 1/2 of the Ratatouille, then layer of zucchini. Now add half of the "cheese" and spread around the top till its fairly even. Add the second layer of noodles, and, if using fresh basil, put 1/2 cup chopped basil here. Then add remaining Ratatouille, and remaining "cheese" Then add the final layer of noodles. Then spoon enough of the leftover fluid from the Ratatouille over the lasagna that it comes up to almost the top but not quite. Try to pour along the edges so it goes down rather than sitting on top. You don't want fluid overspilling and messing up your oven, but dry lasagna is bad. You can always put a large jelly roll pan on the shelf below (not the same shelf) the lasagna to catch the drips if you are worried. Make sure the top layer of noodles is wetted down with the leftover Ratatouille fluid to prevent drying out too much. Place the lasagna in the oven, uncovered, for 30 minutes. The top noodles will have dried out some, but I just drizzled a little more Ratatouille water on them at the end and they softened up again.

*To be honest we placed our Ratatouille fluid in a large frying pan and reduced it until it was about 2/3 of what it started out. We were able to add most of the fluid back into the lasagne then - and reducing it concentrated the flavors. However, for ease of preparation, I decided not to put that in the recipe.
Posted by Sarah at 1:22 PM

Okay, so it wasn't precisely low cal or healthy, and yet, still a salad. The green parts were healthy :)

First, get someone nice like Jon to peel and thinly slice your carrots and daikon (set aside separately in a bowl), and chop your onion, cilantro, mint and lettuce. Juice your 5 limes and place the juice into a bowl with the daikon and carrots, along with up to 3 TBS of sugar (stir well), a few tablespoons of soy sauce (to taste), and a few tablespoons of rice vinegar (to taste, or in our case, till we ran out). Let them soak for 15 minutes in this, stirring occasionally.

Drain the seitan, then throw into a frying pan. Strain the fluid from the carrots & daikon into the seitan pan, leaving the carrots and daikon still in the bowl - set them aside. Turn the seitan up to medium high, and let 1/2 the fluid evaporate while stirring very occasionally (I practically ignored the seitan, we were watching Star Trek, after all). Then taste the fluid, and add about 3 TBS sugar, or until it tastes sweet enough to you. I don't like things too sweet myself, I like the tang. Stir to incorporate the sugar, and cook until the pan is almost dry, then take off the heat to let cool.

Take the 1/2 cup cashews, and place into the coffee grinder (make sure you don't have leftover coffee grounds in there, b/c you don't want coffee salad dressing). Grind until its a powder, and pick out the big pieces that didn't get ground. Put into a bowl, and add enough water so its kind of thick, then add sriracha to taste, then add more water till it gets to be the consistancy of a ranch dressing.

Mix the lettuce, mint, cilantro, and onion, then top with the pickled daikon/carrots, and then with the seitan. Put about 3-5 tablespoons of cashew/sriracha dressing on top. Yum! I wasn't planning to post this (obviously - no pictures), but Jon was so in love with this salad I decided I'd better record it in case we get in a banh mi mood, we'll know how we made it.
Posted by Sarah at 8:51 AM

We ate at a lot of different restaurants during our honeymoon. The most memorable meals, for me anyhow, were the vegetarian Pho, the Korean, and a cashew pesto bagel sandwich. Jon loved the Tom Yum soup passionately, but it was too spicy for me. I decided the first meal I would try to re-create at home was the Pho.
I realize summer is not exactly soup season, but I feel Pho should get a special summer soup pass for the exceptionally fragrant, summery herbs. The Pho at Ban Le in Kona, Big Island had a mushroom broth as its base, so I included mushroom broth in mine. Jon said he didn't think the seitan added anything really, but I think its important to have some protein along with all those carbs, to help you feel full. Next time I might try marinated fried tofu instead, because that's what they had at Ban Le and it was good stuff. 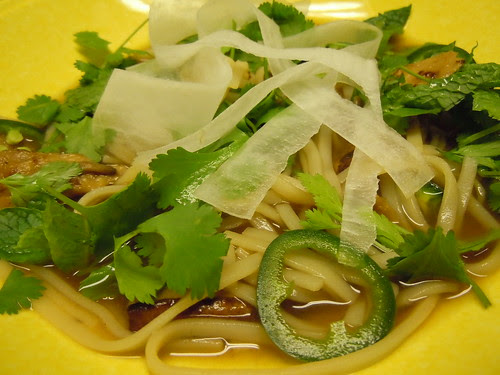 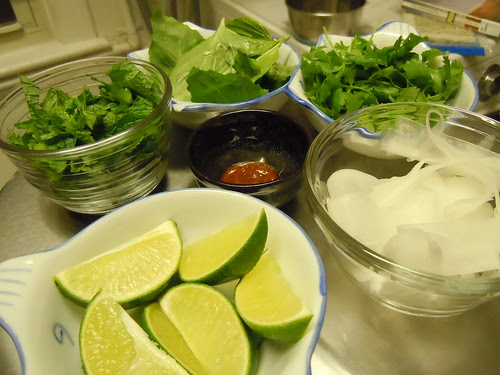 First, cut the white portion of the leek off, and save in the fridge for another dish. Wash the green tough leaves and place in the pot. Quarter the ginger and add to pot. Add the broths and water, cinnamon stick, cloves, star anise, and the 1/2 yellow onion. Let this boil for about 30-40 minutes while you get the other things ready.
Heat a cast iron pan with a bit of spray canola oil to medium high. Add the 1/2 onion which is sliced, and stir periodically until the onion is soft. Some parts should get a bit black and crispy looking, others a dark brown. If this doesn't happen, up the heat a bit. You want to get some blackened and dark brown bits for flavor, while not burning the whole onion. Drain the package of seitan, and check for any thick pieces. Take the thicker looking pieces and tear them up until they are in line with the majority of pieces which will be pretty thin. Once the onion looks soft all over, and somewhat translucent, reduce heat to medium, and add the portabellas and stir periodically until they are soft. Remove from the pan to a separate bowl, re-spray the pan with oil, and add your seitan. You want to get a slightly charred look to this as well, without burning. It will probably stick some, just use a good spatula every 2-3 minutes to scrape it off and stir it up. Don't stir constantly, you need continuous contact with the pan to get the darkened pieces. Once it looks darker tan, add 2 TBS of hoison sauce and stir to combine. Leave on the heat for another minute or two, then remove to the separate bowl.
Take a large glass or ceramic bowl, add 8 cups of water, and microwave for 8 minutes. Then add the noodles, and microwave for 4 more, stirring the noodles halfway through. Then drain the noodles and rinse under cold water.
Once your broth is ready, you can now use a slotted spoon to remove the onion, star anise, leeks, etc. Add the sliced serranos, drained noodles, seitan, onion and portabella to the broth. Add the sugar, stir well, and 1 TBS of the soy sauce. If it seems to need more salt, add a second TBS of soy sauce.
Now pour yourself a bowl of soup, and add your condiments. You want to add these only to each bowl of soup you serve, not the main bowl, because you don't want your herbs to get very cooked, just only slightly wilted. If you like things spicy, add a bit of Sriracha Chili Sauce. Do this before you squeeze a lime wedge or two into the bowl, because otherwise you can overdo the lime easily. Add lots of cilantro and bean sprouts, and less mint and basil. If your soup needs more flavor, you can add hoison sauce.
Posted by Sarah at 8:18 AM