Just so you're not in suspense, here's the short answer (a shot of the deli case): 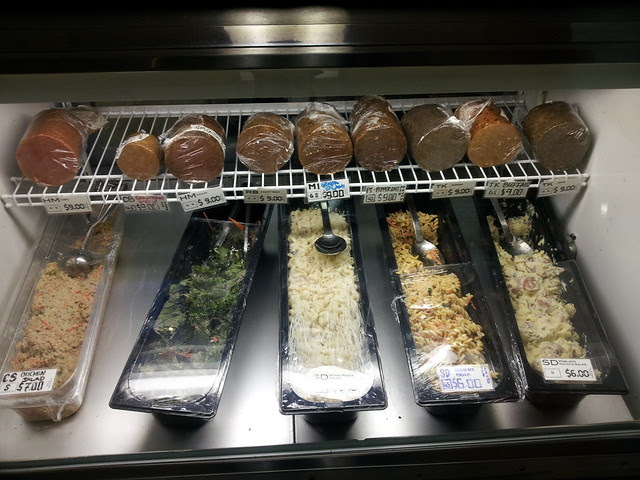 Gutenfleischer's is a vegan butcher shop located inside a vegan bakery (Dough) in Atlanta, GA. The basic setup is similar to a traditional deli. OK, it's not really a vegan "butcher shop" because you don't get to choose a particular "cut" of wheat or soy (e.g. "I'll take a radicle, two cotytledons, and a lean cut of endosperm"), but you do get to choose from an array of homemade fake meats (made from wheat gluten, or seitan) which are then sliced super-thin on a real meat slicer: 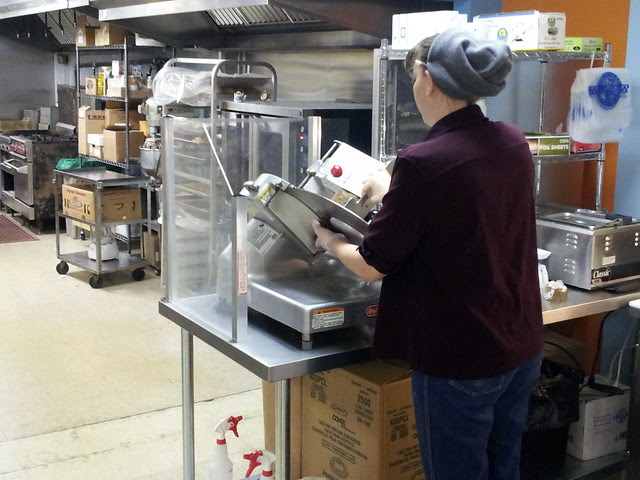 The end result looks like this, not terribly different from what you'd buy at a normal deli. Super-thin slices wrapped in plain brown wax paper (please ignore the old toaster oven tray they're sitting on): 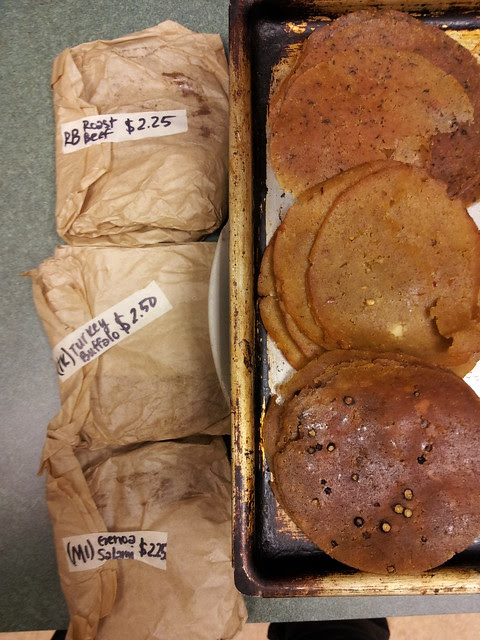 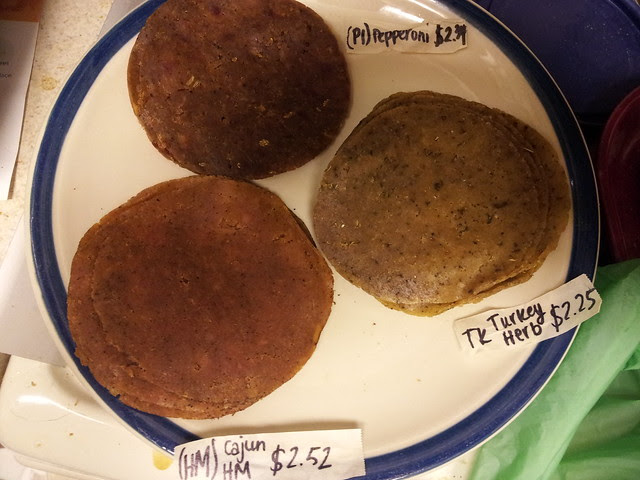 Being curious, I naturally had to try every one, and I knew that Sarah would want to as well. So I ordered a quarter-pound each of all nine flavors, which kept her slicing for quite a while. Those were ham, Cajun ham, Canadian bacon, roast beef, Genoa salami, pepperoni, pepper turkey, buffalo turkey, and herb turkey. I also got a hot sandwich (a roast beef "au jus" thing which was surprisingly tasty and satisfying), a vegan sausage biscuit with tofu scrambled egg, and some desserts.

Unfortunately I visited about two months ago, so I don't have a perfect recollection of each of the meats. However, overall we enjoyed them quite a bit. Relative to their meaty cousins, these certainly tended to be significantly less juicy, although to be fair it took us a few days to get to all of them, which likely dried them out a bit. As you'd probably expect, they didn't taste just like meat, but they did have lots of flavor. The ham and bacon were the closest to tasting like the real thing, and might even fool someone not paying close attention. Most of them were very different, but good in their own way. For example, the Genoa salami didn't taste like salami much, but it did have a lovely peppery flavor. The turkey buffalo was nice and spicy, the pepperoni was complex and delicious, and while the roast beef had a mild flavor I still definitely enjoyed it.

If you find yourself visiting Atlanta it's definitely worth stopping by. Aside from the surreal experience of watching logs of vegan meats be sliced, and the unique culinary experience, you also may get ideas for changing up your diet at home.