I ate the remainder of last night's dinner out for breakfast, so once lunch rolled around I went to the fridge to see what I could find. I was surprised to discover perfectly good fresh green beans and two bags of tomatoes (one still good!), along with some beet greens. I also noticed the little plastic container with thyme in it was still good, so I had enough to make a dish of some sort.

Firstly I turned the burner on medium low and sprayed with a little oil and waited for it to heat up. Then added the sliced onions and let them cook pretty slowly, I wanted to caramalize them. I let them cook for about 15 minutes, stirring every few minutes. Once they looked brown enough, probably not officially caramalized but good enough, I added the tomatoes and green peppers, added 2 TBS of water, and covered for 15 minutes. Then I realized I should probably add the thyme in there, so I got to removing the thyme leaves from the tough stems. It helps if you grab the stem about 1/2 centimeter from the top, and drag your fingers while pinching downward. Then you can pinch off the top which is soft enough to add to the dish, and discard the woody stem. 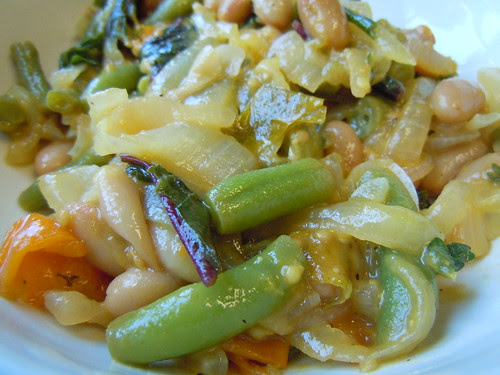 Then I added the thyme and vegetable broth powder, stirred and covered for another 5 minutes. Then I added the beet greens and covered for another 3 minutes and then stirred. At this point I stirred uncovered for a bit until the beet greens looked like they were nice and evenly wilty. Then I added black pepper and a drained, rinsed can of canary beans from goya, which come already super salted so I didn't have to add any extra salt to the dish. It came out really nice with a very sweet tomatoey oniony goodness to it. I suppose I should eat this with rice or bread but I'm too lazy to make rice and we're out of bread. Actually, I feel like this would go even better over some soft white rice noodles or something else with the texture of egg noodles.
Posted by Sarah at 10:11 AM

As a birthday present, Jon's mom sent me a large branch of fresh curry leaves. Your average joe would probably open said gift and say "whuh?" I however was overjoyed, and instead responded with: "EEEEEeeeee!" Fresh curry leaves, like pomegranate molassas, or rosewater, are in that special list in my head of coveted items I'd like to cook with when I get a chance. She included recipes which she had photocopied, and some of them had stars next to them. One was curry leaf sambar, which contains an astonishing 30 curry leaves. (don't worry, still no shortage, and you can store 'em in the freezer too!)

The recipes are from a cookbook we also happen to own but I have regarded with fear since Jon explained "its really good but everything takes like 4 hours to make, its crazy hard". However, these particular recipes really weren't bad at all. It all came together at the speed of a normal meal. I decided to make the curry leaf sambar and some vadai to go with. I have never made either before, so it was an adventure.

For some reason we had Urad dal (also called black dal, although its tan colored) in our cabinet. I think we had a reason for that. Anyhow, it came in handy because the recipe required 3 kinds of dal! The orange colored ones, yellow, and urad. I rinsed them this morning before work and let them soak in the fridge all day. Those were to make the vadai, which are apparently just blended up soaked lentils with some ginger, chilis and onion - who knew? 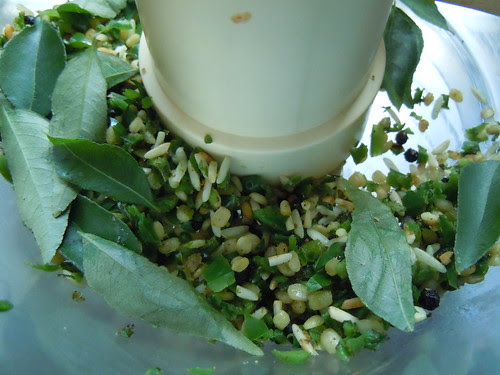 The sambar was a little more work, since it required frying two sets of spices. I didn't have asafoetida, but I put some white pepper in there instead because it had a similar smell, according to me. The recipe called for tamarind paste and we had concentrate, so I wasn't sure how much to put, nor how the final product was supposed to taste, so I had to wing it. In the end, I did end up adding some of Jon's magic powder, which is some chutney powder we add to Indian food if it needs that extra kick.

So I start frying my first vadai, and I'm watching the oil bubble, and I'm waiting for it to get brown, and then giving sidelong glances to the large tub of batter which hasn't been fried yet...and then it occurs to me. We have donut pans! This was something I picked up for my birthday last year, because it was a donut party and I made some gluten free donuts in it. So I was like, why stand around forever like a sucker frying these up in batches when I can get them all done at once in the oven? I know, I know, hardcore vadai types are going to be rolling their eyes and groaning at this point. Hey man, if your legs can take it, feel free to fry 'em. I however biked to work and back AND to whole foods in a vain asafoetida effort during lunch, and my legs weren't having it. 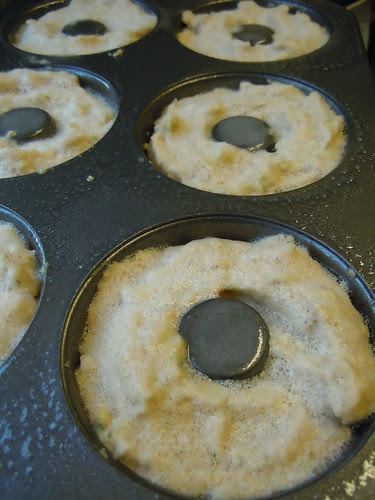 Vadai before baking, with some sprayed on oil

Final results: I loved the sambar and the combination of the vadai and sambar. The fried vadai did have that extra special edge to them, but overall they weren't so far superior to the baked that I feel its worth the effort to fry. I approve of baked vadai! 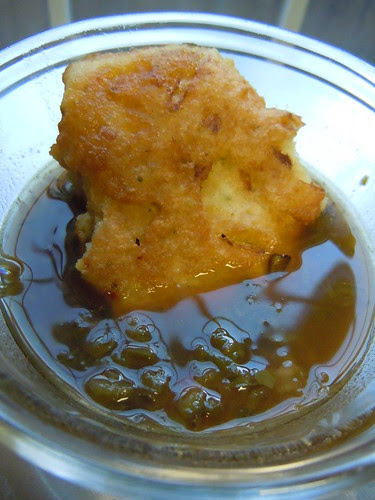 Oh, one other thing. I made lime-tamarind-agave soda! I love sour things, and had some limes & club soda in the fridge. The soda is good, the only problem is its brown, and not clear brown like coke, but cloudy brown, so it has image issues. It kind of reminds me of that Austin Powers movie where he grabs the beaker and drinks from it and exclaims "ahh...kind of...nutty!". I'm just going to allow you to Google that if you want to gross yourself out, unless you've figured it out already, in which case I'm not surprised.
Posted by Sarah at 6:27 PM