How to throw a flavor tripping party

Once we learned that there was a berry that made sour foods taste sweet, we knew we had to try it. I mean, the active ingredient is called "miraculin!"* Anyway, to prepare we got our tablets (we used Miracle Frooties XL from Amazon and they were great) and procured a wide array of sour foods. We wanted some things that were super-sour, other than were sweet and sour, at least one "plain sweet" food as a reference, something bitter, and some surprises. We kept the party small both because the tablets are expensive and so our gimpy dog wouldn't get too wild.

We started out with fruit: 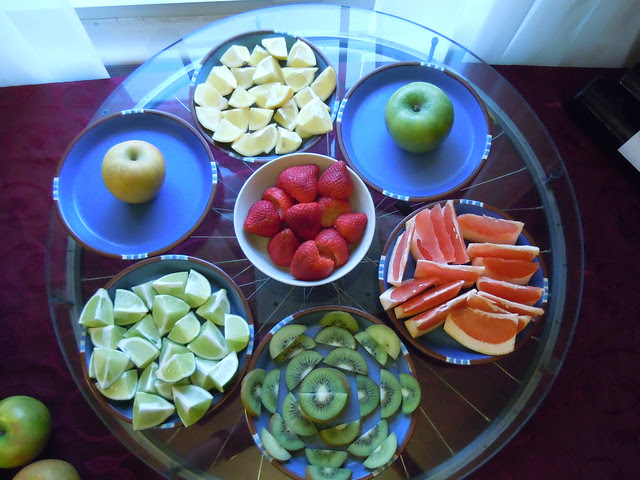 The pink grapefruit was the best, it wasn't very sour so it just gave it enough sweetness to overcome the bitterness. The kiwi was good, and the strawberries were delicious (I didn't like them dipped in vegan sour cream, even though it did taste sweet [I liked it! -Sarah]). The Granny Smith apple was too sweet but edible, the Gold Rush apples (which are already intensely sweet AND intensely sour) were way too sweet to eat. Ditto with the limes and lemons, they were like eating straight sugar. We were going to make sugar-free mojitos or something, but they're so sweet (and not sour at all) it's way too intense.

Here's most of the rest of our spread: 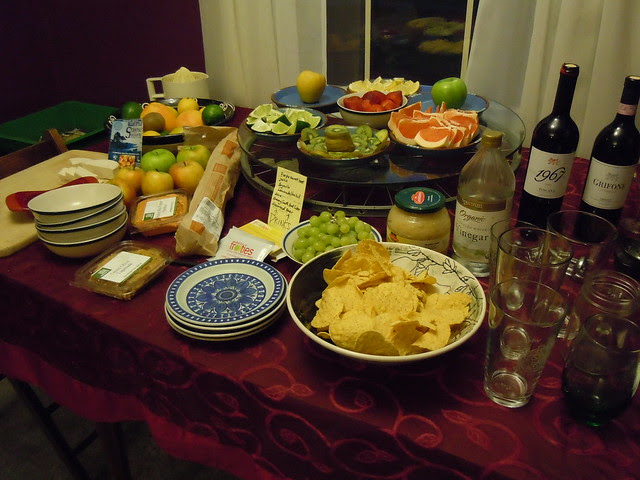 I would recommend skipping the vegan blue cheese (which just tasted normal), grapes taste normal too but it's a nice reference to the super-sweet foods that are usually sour. Sauerkraut is definitely recommended for the unique experience, but it was so sweet and cabbagey that we found it pretty revolting. The salsa we had was sweeter, but strangely not gross. The hummus and tapenade tasted about normal, which was a nice relief from everything being so sweet. Not pictured are some amazing unsweetened lemon-raspberry tarts.

For drinks, we got some dry high-acid Italian wine which ended up tasting sort of like a dessert wine, but more complex than they typically are. The beer was good too, Sam Adams black lager was especially tasty, and the Stone IPA was nice since the bitterness balanced out the sweetness. I also had some Angostura bitters I added to my attempt to make dilute sugarless lemonade, but even with the bitters it was still too sweet. Taking a shot of vinegar was universally acclaimed as the most interesting and surreal experience of the night. It's still intense and burns, but also very sweet. Not something you'll forget.

If we did it again, we might try the normal fruit tablets instead of the XL version, since the XLs have twice as much and perhaps that's why everything was so painfully sweet. If you try it out, let us know how it goes in the comments section!

*does calling an ingredient miraculin remind anyone else of 'unobtainium' from the movie Avatar? -Sarah
Posted by Jon at 9:20 AM

We did another party ( http://www.flickr.com/photos/13829298@N00/9176285300/ )
and determined that mirin was very interesting (tasted like caramel sauce). Hot sauce or sriracha is also reputedly good. Our full spread for round two was sauerkraut, cherry tomatoes, lemons, pink grapefruit, kiwi fruit, pink lady apples, white wine, black IPA, mirin, pineapple juice, cookies (to show they taste the same) and of course the obligatory vinegar shots.