When I found out my husband (then boyfriend) only bought food that he had a specific plan to use in the next week, I thought, who lives that way?  What a restrictive and hard way to live!  I believed I could never live like that - that the advance planning would take the fun and spontaneity out of life.

I can report that, 11 years later, cooking and life is actually just as enjoyable when you plan your meals in advance.  Surprise! As a bonus, we waste a lot less food and eat a more balanced diet.

Each week we look through cookbooks for recipes we're interested in and add the ingredients we need to the groceries list in the app Our Groceries.  We have a separate list called "meals this week", where we list the recipe name, the cookbook abbreviation, and the recipe page number.  We plan everything down to the exact number of onions we'll need for that week.  Why can I do this but am unable to get birthday cards mailed on time?  A good question.

If you're tired of sifting around in a drawer for the right size measuring spoon, get yourself some inexpensive command hooks and hang them all up! 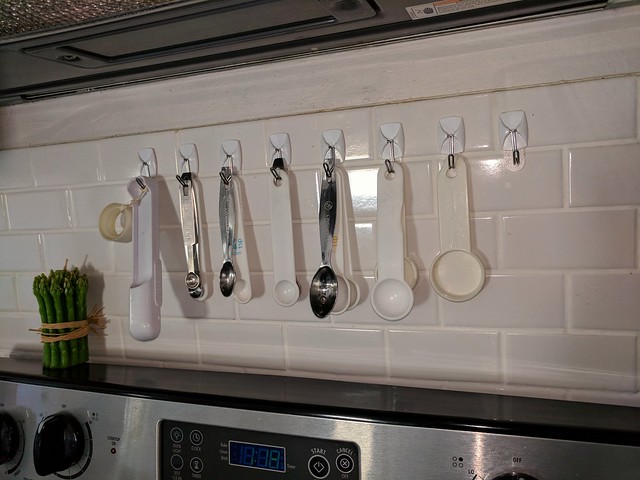 I have super sensitive eyes, so when either I, or anyone near me chops an onion, it hurts.  I bought these onion goggles years ago, which have a seal around your face to prevent the fumes of the onion from reaching your eyes.  They still work perfectly.  I love them.

I'd also like to note the 2 bag system we have for garlic.  We have newer garlic in the bag to the right, and then the older garlic in the bag to the left.  This is good for when you have garlic from last week and newer garlic and you want to know which one you should use first so you don't end up letting old garlic get past its prime.  The largest bag is for onions and potatoes and looks kind of gross and stained, but it's really useful.  The stretchy nature of these three bags allows us to store more stuff in them than you would think possible.. 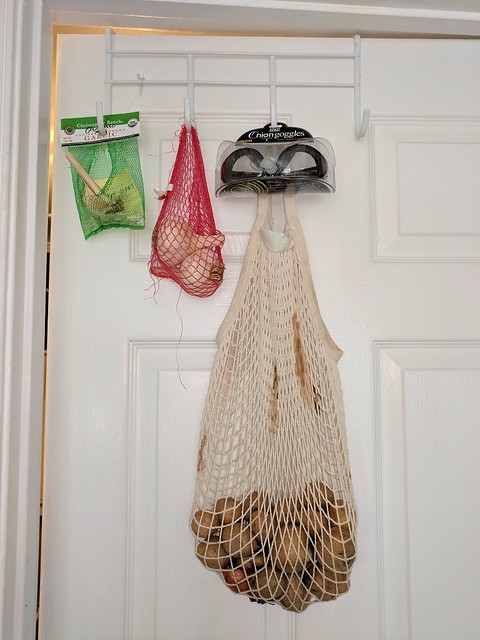 We'd heard of storing veggie scraps in the fridge, and yes, we've tried it.  What is the result?  A bowl of slimy, rotting veggie scraps judging you for not getting around to making vegetable stock in time.  The solution?  Freeze 'em.  What is a suitable veggie scrap?  Pieces of onion, garlic, mushrooms, carrot peels, leek stems, sweet potato peels.  What is disgusting?  Beet peels, kale stems, or putting in too much onion and garlic.  The freezer doesn't keep these scraps good indefinitely, but it keeps them good long enough for us to get around breaking out the Fagor plug-in electric pressure cooker to make stock. 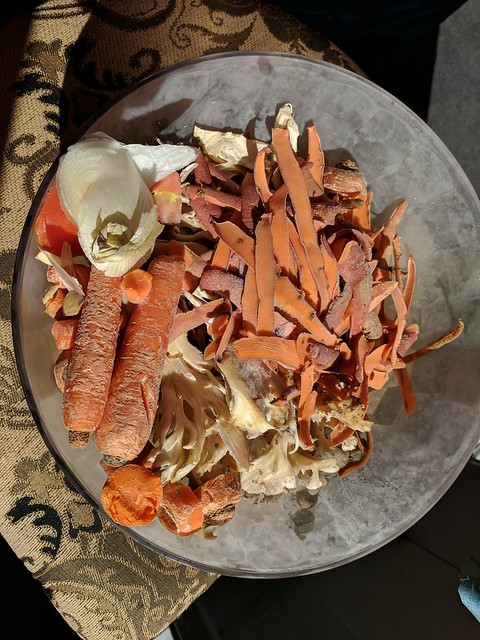 You can freeze the resulting vegetable stock in 2-3 cup containers for later use in recipes.

Hot pasta is draining in the sink. You grab that half used pasta sauce from the fridge before the pasta starts sticking together, only to discover it's growing mold.  Yep, we've all been there.  But not anymore!  The minute you use the first half of the pasta sauce, break out your ice cube tray (go buy one for crying out loud), and pour the second half you're not using into the tray.  Once they are frozen, remove them and place in an air-tight tupperware. You're not done yet!  Now grab a rubber band, masking tape, and a sharpie.  Wrap the masking tape around the rubber band, and then write "pasta sauce" on the masking tape, and put the rubber band around the tupperware.  I've tried lots of methods of labeling my frozen cubes, and this one works out the best. 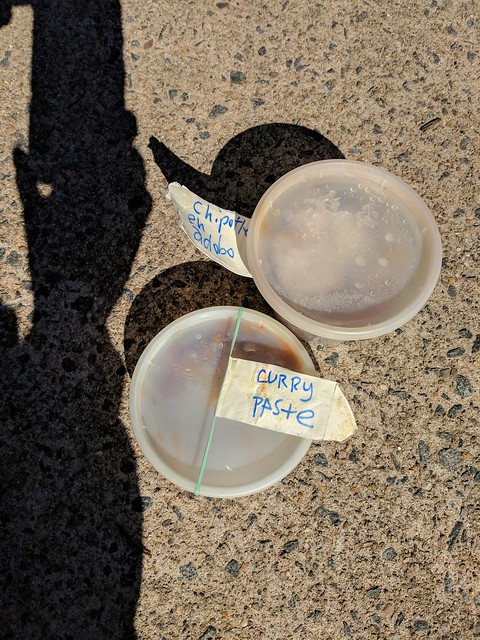 What half-used things should you be making ice cubes out of?


Things which have not worked out so well are: lemon zest (get too dried out and tastes like nothing), lemon juice (I don't know why, we just can't seem to remember it's in there). For a while we had a whiteboard on the fridge listing what we had, but the magnets broke and we haven't replaced it.

You don't have to buy some silly plastic container that holds hardly any cilantro like I've seen in some kitchens.  As long as you have a coffee mug, a knife, and a plastic bag, you got this.

Make sure you're buying decently fresh cilantro - no yellow leaves, no rotting leaves, no black areas.  Yuck.  This only keeps good cilantro good, it's not making zombie cilantro out of your half rotting cilantro.

Moving on.  Take your just-purchased green and healthy cilantro and chop the very ends off.  This ensures that if the ends have hardened and can't take in water anymore, you're removing them and leaving a stem which can absorb water. 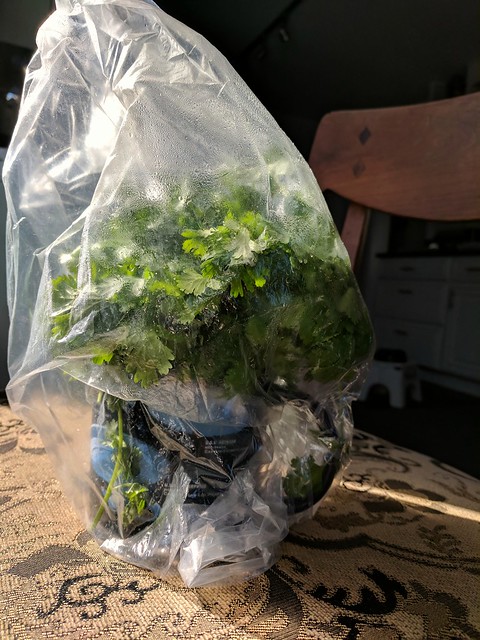 Your cilantro will stay better so, so much longer.  You'll eat tacos or baingan bharta, and everyone will be happy.

Kitchen hack #7 Cook on the couch
Feeling too lazy to do all of the chopping and prep work for a nice meal? Rather than giving up, move the washed veggies to peel & chop to a cutting board on a coffee table in front of your couch. Sit on your butt and chop while watching Netflix or listening to music or chatting or something, then head to the kitchen with everything pre-chopped. You feel like you're on a cooking show with everything all ready to toss in!
Posted by Sarah at 12:50 PM

This doesn't save time, but you can save energy when cooking pasta or pizza by turning off the power before it's done, and letting it "coast." So for example I eat a frozen pizza that says to preheat (takes ~15 minutes) then cook for 11-12. Instead I put the pizza into the cold oven, turn the oven on, turn the oven off after 10 minutes, and wait another 10 minutes for the pizza to be done. For pasta you can cover the pot and turn off the heat after a couple of minutes (especially with electric burners), and just cook a bit longer until done.