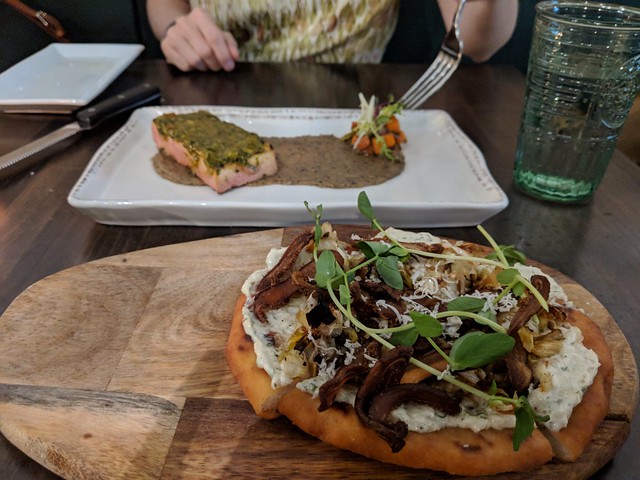 The Fancy Radish is the new upscale vegan restaurant in DC from Richard Landau and Kate Jacoby of Philly fame. After two visits, Vegan Lady and I are ready to share our review.

Though pricey and hard to get reservations, it's definitely worth it. They are clearly still working out a few kinks from some dishes, but others are spot on. Here's the blow-by-blow, but if you just want to know what we recommend you order, look for the 👌 symbol:

APPETIZERS AND MAIN COURSES:
Rutabaga fondue w/ soft pretzel: 👌
Damn. This is really phenomenal. The texture is velvety and fondue-like, but the taste is neither real cheese nor vegan fake-cheese, but it's own (delicious) thing. There's a bit of nutritional yeast in the flavor but not too much. And the pretzel is amazing - fluffy and soft inside, with an outside that's almost crisp. The fresh mixed pickles (cauliflower, carrot,etc.) are good too, but not key to the beauty of the pretzel and fondue.

Fancy radishes:
This was fine, but not worth the opportunity cost of something else on the menu. There were four kinds of radishes (black, 'purple ninja', watermelon, and a fourth I forget) each of which paired with 1-2 other flavors (like shisito peppers, or shredded zucchini with sesame seeds, etc.). Of the lot, they were all good, but only one was great.

Chiogga beet picnic:
This was really nice, better than expected. It's beets with a BBQ-ranch theme, including brussel sprout slaw and lovely little toast points. It tastes like something you could make at home, but done very well.

Peruvian potatoes:
This was the only real dud we had. The potatoes are thinly sliced, really oily, and crazy salty (although we had this after they'd only been open a week or two, maybe they fixed it). The other flavors were good but in short supply - mostly you just got the salty potato flavor.

Langos👌
This was just incredible through and through (it's the bottom dish in the image above). Again the skill of the baker shines through in the soft and light yet slightly crispy potato bread in the form of a pizza crust, and it's topped with leek 'sauerkraut ' (which is creamy rather than vinegary), fried smoky mushrooms with the spot-on texture of fried bacon, and little shreds of horseradish. It is salty and very strongly flavored, but those flavors are all the best. You could honestly eat this on top of pasta or a slice of bread and still be in good shape.

Miso butter noodles:
Other than the Peruvian potatoes, this was also fairly disappointing. The noodles are oily but really mild - you get the nori and not much else. If you like really subtle flavors this may be a good pick but otherwise save your appetite for the more tempting options.

Chermoula grilled tofu:
This was really good, although it came at the same time as the langos so it suffered by comparison. Basically you have nicely done tofu w/ North African eggplant sauce, and a tiny carrot salad that provides a really great flavor combination but in too small a quantity to round out the dish as we would have preferred. With maybe double the salad this would have been a keeper.

Seared maitake:👌
This was our favorite 'main course' although the second time it wasn't quite as good. You get a good chunk of maitake mushrooom (hen of the woods) seared in olive oil, a celeriac fritter (like a hush puppy) with some minced celery 'relish' and creamy celery sauce. Everything tastes wonderful and works really well together - this dish highlights the concept of Vedge and Fancy Radish really well (letting vegetable foods shine). The second time we came the dish was a bit too salty, and the fritter slightly mushy, but it was still great.

DESSERT:
Sticky toffee pudding:
This is off the menu now - it had a great flavor but was wayyy too sweet. It was like a butterscotch brownie with caramel sauce, and was supposed to come with smoked cedar ice cream but actually came with halwa ice cream, although the waiter insisted it was cedar our taste buds were in accord so they must have run out).

Sorbets and ice creams:
We got a mix of three - uber luxe (deep rich chocolate with crispy bits, pea shoot ice cream, and I forget the third but it may have been yuzu sorbet). All were good, but none were totally mind-blowing, so given the other desserts I'd skip this next time.

Sour cherry jellies:👌
This sounded like it couldn't possibly work: sumac jelly doughnuts, halwa ice cream, and a cherry blossom shooter. But it was a real delight. The 'doughnuts' were really more like beignets on a cherry-sumac sauce, but they had a great texture and flavor. The halwa ice cream tasted like you'd expect and complemented the sumac and fried dough really well. The cherry blossom shooter was some sort of kombucha or something - light and acidic and also worked with the rest of the dessert. Sarah found the overall dish too sweet, however.

Chocolate bar:
Basically a dense chocolate fudge on a crispy chocolate brownie / cookie crust, topped with elderflower-infused pecans and served with lavender ice cream and blackberries. It was rich, decadent, and the floral flavors kept you a bit off balance but I ended up licking my plate clean. Sarah has less tolerance for floral flavors in her food so liked the main bar but not the ice cream.

Blueberry tart:
OK, the tart had a bottom crust almost an inch thick, which was a shame, because everything else was superb - the blueberry filling, the sorrel ice cream, and the lemon curd. But there was way too much crust, and the texture on the bottom suffered for the thickness.

DRINKS:
Peridot meteor:👌
Made with gin, celery, hot bitters, and olive oil this sounded gross but too weird to miss but ended up being a very pleasant surprise. The bitter celery flavors were dialed back, something sweet was in there to round it out, the oil was also pretty light, and it all blended really well.

Woodmaze:
This is an earthy-smoky party made with bourbon, pu'erh tea (a very earthy and smoky high-grade fermented Chinese tea), and Manzanilla sherry. It was complex and tasty, but to be totally honest the flavors didn't go that well with the meal so would be better as an after-dinner cocktail.

Raphanus shade:
Another one I had to order for the sake of weirdness - it's rye with black vinegar, a slice of raw black radish, and Amaro Ferro-Kina (an Italian apertif). The vinegar really comes through on the nose - as I lifted it to my lips I definitely had regret as it seemed like I was doing a kimchi shot. The flavor was more mild and well balanced than I expected, I ended up enjoying it enough to finish it, but definitely wouldn't order again as for me to vinegar was just too much.
Posted by Jon at 4:30 PM