After the infamous Oatly shortage of 2018, it seemed like there was a huge untapped market for oat milk. As a result several companies scrambled to put together a product, and by spring 2019 there were quite a few competitors vying for that demand.

Sarah did not like Oatly; she found it too sweet. I thought it was OK, but not really worth buying. But when Sarah's mom bought some of the Silk oat milk and we liked it, we knew it was time for an oat-off (all with unsweetened varieties): 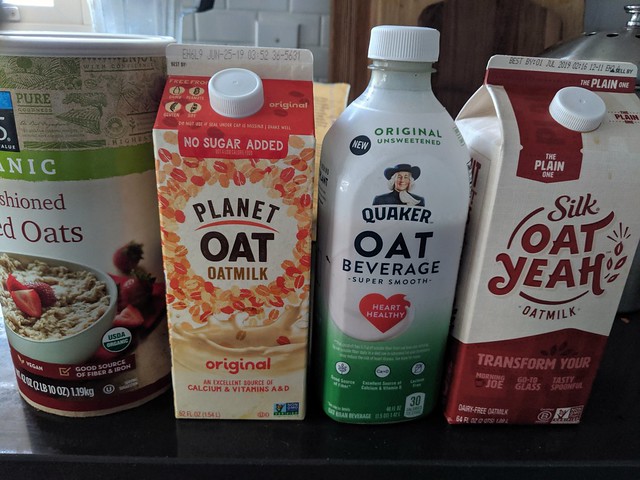 Quaker Oat Beverage:
Last place. The first problem is that it settles out to such a degree that you'd need one of those paint shaker machines to get it mixed up properly. Otherwise you shake it hard for about a minute and there's still a bunch of gunk on the bottom. Then you drink whatever you've got, and it's super chalky and thick (like eggnog almost). Has a nice mild oat flavor, but it's not a good drink. Note the avoidance of the term "milk" on the label - probably wise given all the lawsuits and rules changes in Europe and the US.

Silk Oat Yeah Oatmilk:
This was the one that Sarah really liked initially. It's thinner than Quaker (still thicker than normal soy or almond milk), has a stronger oat flavor, and is somewhat sweeter. Surprisingly didn't really work with hot chocolate, despite the sweetness. Still tasty and worth drinking.

Plant Oat Oatmilk:
This was the dark horse. It's a company we'd never heard of, and it was a full dollar less than the other options. To our surprise, this was the winner; originally Sarah didn't even want to try anything other than Silk but w/ a blind tasting she preferred this one. It's got a pretty mild oat flavor, was the thinnest of the bunch (more like normal plant milk), and has its own flavor somehow a little bit reminiscent of cow's milk (which I don't like, but was OK here). Unfortunately, it had the lowest vitamin content, and since Sarah relies on her plant milk for calcium that was a real downside.